Remembrance and Prayers for Ashesh Dhar, Tata Motors : A Big Loss to Industry

The Industry has been pouring its heart out to this horrid news.

Ashesh had been a great friend and a supportive colleague to many across his long and diverse work experience in the Automotive Industry.

He went to National High School at Srinagar and thereafter did his Mechanical Engineering from BITS Pilani.

In 1991, he joined Bajaj Auto as a GET where he served for 7 years. He then moved to TVS Motor Co and enjoyed a great stint of 10 years there.

In 2011, he moved to Tata Motors where he had yet another great stint across sales, marketing, customer care. The company elevated him as head of EV Business.

He was instrumental in the creating a brand for Tata Motors in the EV Space.

END_OF_DOCUMENT_TOKEN_TO_BE_REPLACED

Can you Miss it ?

END_OF_DOCUMENT_TOKEN_TO_BE_REPLACED

(Reuters) – Volkswagen AG (VOWG_p.DE), Europe’s largest automaker, is expanding its cloud-based software and data portal, aiming to develop it into an industry-wide marketplace where business customers can buy and sell industrial applications, the company said on Thursday.

VW’s “industrial cloud” was designed in partnership with Amazon Web Services and eventually will link more than 120 VW factories around the world to the automaker’s 1,500 suppliers and their 30,000 plants.

The portal is intended as a place to exchange data and software to help accelerate the digitalization of factory processes from stamping to painting to machinery maintenance, according to Nihar Patel, VW’s executive vice president for strategic core projects.

VW has opened the portal to the first group of supplier partners, led by Siemens AG. Those partners are expected to contribute software applications to be shared with VW and among themselves, in what the automaker described as “an App Store approach.”

END_OF_DOCUMENT_TOKEN_TO_BE_REPLACED

NEW DELHI (Reuters) – Bajaj Auto (BAJA.NS) is betting that an early recovery from the ravages of COVID-19 in motorcycle sales in its export markets will help it offset pandemic-related disruption at home, its chief financial officer said.

The Indian company, which also sells rickshaws and small commercial vehicles, is already the largest exporter of motorcycles from its domestic market, where sales have been slow to pick up due to local lockdowns.

“All our export markets were also affected but recovery has been better (there) than in India,” Soumen Ray told Reuters in an interview late on Wednesday. “We will continue to remain aggressive on exports.”

Bajaj plans to open an assembly plant in Brazil within 18 months, as well as a design office in Thailand to handle sales for the ASEAN region, and another design office in Europe, Ray said.

This year, however, they have predominated. Between January and June, it exported 664,000 motorcycles while selling 589,000 in India, company data showed.

END_OF_DOCUMENT_TOKEN_TO_BE_REPLACED

The auto industry is one tough industry to crack. As in, enter for business or work. Most join the Industry as interns and retire as CXOs!

The Suppliers and the Dealers are also a close knit fraternity. They compete and cooperate!

Co-opetition in the Truest Sense

Whether its the technical thing or the passion or both, surely works as an insulator as well as an adhesive here!

Last 3 months + of Covid have changed a lot of things especially the “Tough to Crack” part. The industry has opened up!

The Procurement Teams at Auto Makers are a worried lot lately. Till the time there was a complete lockdown, everything was shut and it was still ok, well less worrisome!

Since the production resumed, their supplies suffered shocks almost every week. Most Auto makers follow Lean Manufacturing, Direct on Line or Just in time concepts. Now when suppliers location gets proclaimed as a Containment Zone at drop of a Hat, their supplies get stuck.

The situation exacerbates as Tier 1 Suppliers are dependent on Tier 2, Tier 3…Tier N Suppliers. Any one getting contained down the chain, the final supply to Auto makers gets affected. That vehicle booking gets cancelled at the Dealer end and thats trouble! 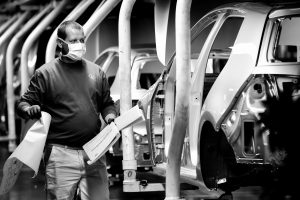 They become a need of the hour. There have to be back ups and redundancies at different locations as the Show Must Go On! This needs rethinking and fine tuning not just with the auto maker and Tier1 but across the supply chain. It goes beyond redundancies and covers automation, digitalisation, resource allocation & real time coordination and sharing.

Coming together and working as “One Industry, One Family” thereby becomes a pre requisite.

END_OF_DOCUMENT_TOKEN_TO_BE_REPLACED

Top Legal Gurus in the House.
Can you Miss it ?

END_OF_DOCUMENT_TOKEN_TO_BE_REPLACED

(Reuters) – Tesla Inc’s blistering stock rally is putting Chief Executive Elon Musk in reach of a payday potentially worth $1.8 billion, his second jackpot from the electric car maker in about two months.

Musk has already achieved targets related to Tesla’s financial growth that are also required in order to vest the approaching options tranche.

Each tranche gives Musk the option to buy 1.69 million Tesla shares at $350.02 each. At Tesla’s current stock price of $1,397, Musk would theoretically be able to sell the shares related to the tranche that vested in May and the upcoming tranche for a combined profit of over $3.5 billion, or $1.8 billion per tranche.

Musk’s first tranche was worth about $700 million in May, when it vested, but its value has since increased along with Tesla’s stock price.

Tesla has surged 500% over the past year as the company increased sales of its Model 3 sedan. 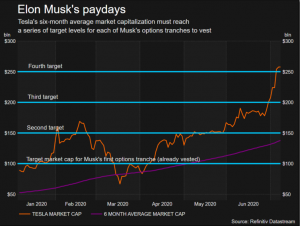 The solid delivery numbers heightened expectations of a profitable second quarter, which would mark four consecutive profitable quarters, a first for Tesla, and a key hurdle to be added to the S&P 500 index.

Musk, who is also the majority owner and CEO of the SpaceX rocket maker, receives no salary, only the options in his pay package. A full payoff of all tranches would surpass anything previously granted to U.S. executives.

When Tesla unveiled Musk’s pay package, it said he could theoretically reap as much as $55.8 billion if no new shares were issued. However, Tesla has since issued shares to compensate employees, and also sold shares in secondary offers, including a $2 billion stock sale in February.

You shall receive your Log in Details for the Online Program, 30 Min Before the Program Begins, by email. If you don’t receive, pls let us know!

END_OF_DOCUMENT_TOKEN_TO_BE_REPLACED

Uber is not allowed to run its own ride-sharing fleet in Japan as it does in the United States and elsewhere since local regulations ban non-professional drivers from ferrying paying customers.

Eager to build a customer base in the world’s third-biggest economy, Uber has focused on expanding its Uber Eats food delivery service, which has proven popular, particularly amid the coronavirus pandemic.

Didi Mobility Japan, a joint venture of China’s Didi Chuxing and SoftBank Corp, has also introduced a service in Japan to connect customers with taxis.