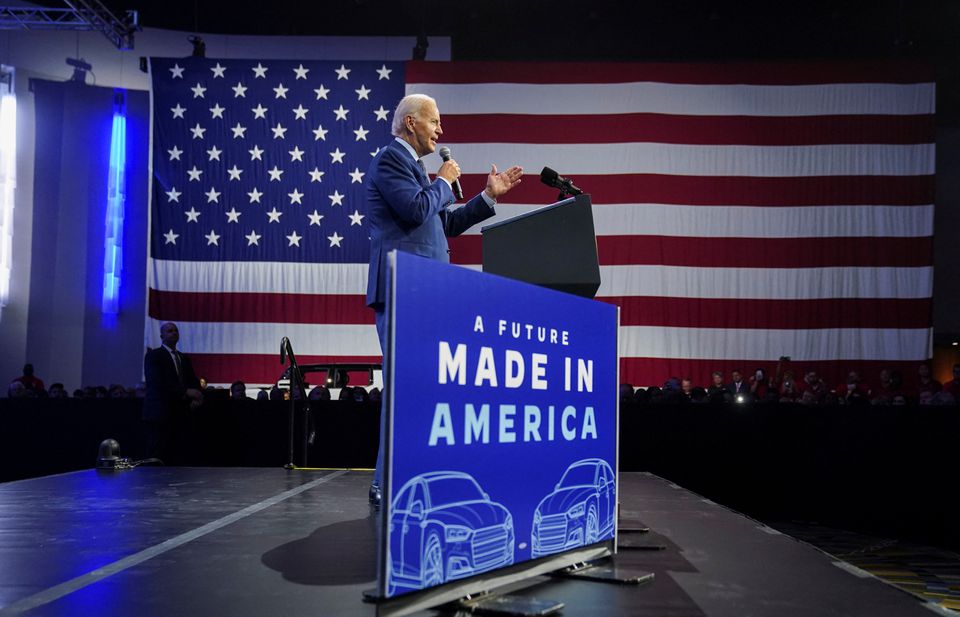 WASHINGTON, Oct 19 (Reuters) – The Biden administration said on Wednesday it is awarding $2.8 billion in grants to boost U.S. production of electric vehicle batteries and the minerals used to build them, part of a bid to wean the country off supplies from China.

“By undercutting U.S. manufacturers with their unfair subsidies and trade practices, China seized a significant portion of the market,” President Joe Biden said Wednesday in announcing the awards.”Today we’re stepping up… to take it back, not all of it, but bold goals.”

The grants, which are going to projects across at least 12 states, mark the latest push by the Biden administration to help reduce the country’s dependence on China and other nations for the building blocks of the green energy revolution.

The funding recipients, first reported by Reuters, were chosen by a White House steering committee and coordinated by the Energy Department with support from the Interior Department.

But the program does nothing to alleviate permitting delays faced by some in the mining industry.

Albemarle is set to receive $149.7 million to build a facility in North Carolina to lightly process rock containing lithium from a mine it is trying to reopen. That facility would then feed a separate U.S. plant that the company said in June would double the company’s lithium production for EV batteries.

Albemarle, which also produces lithium in Australia and Chile, said the grant “increases the speed of lithium processing and reduces greenhouse gas emissions from long-distance transportation of raw minerals.”

Piedmont Lithium Inc (PLL.O), whose shares rose nearly 11% following the news, was awarded $141.7 million to build its own lithium processing facility in Tennessee, where the company will initially process the metal sourced from Quebec and Ghana. Piedmont’s plans to build a lithium mine in North Carolina have faced strong opposition.

Talon Metals Corp (TLO.TO), which has a nickel supply deal with Tesla Inc (TSLA.O), will receive $114.8 million to build a processing plant in North Dakota. That plant will process rock extracted from its planned underground mine in Minnesota.

The grants are “a clear recognition that production of domestic nickel and other battery minerals is a national priority,” Talon said.

By 2030, Biden wants 50% of all new vehicles sold in the United States to be electric or plug-in hybrid electric models along with 500,000 new EV charging stations. He has not endorsed the phasing-out of new gasoline-powered vehicle sales by 2030.

The White House said that the United States and allies do not produce enough of the critical minerals and materials used in EV batteries.

“China currently controls much of the critical mineral supply chain and the lack of mining, processing, and recycling capacity in the U.S. could hinder electric vehicle development and adoption, leaving the U.S. dependent on unreliable foreign supply chains,” the White House said.

In March, Biden invoked the Defense Production Act to support the production and processing of minerals and materials used for EV batteries.