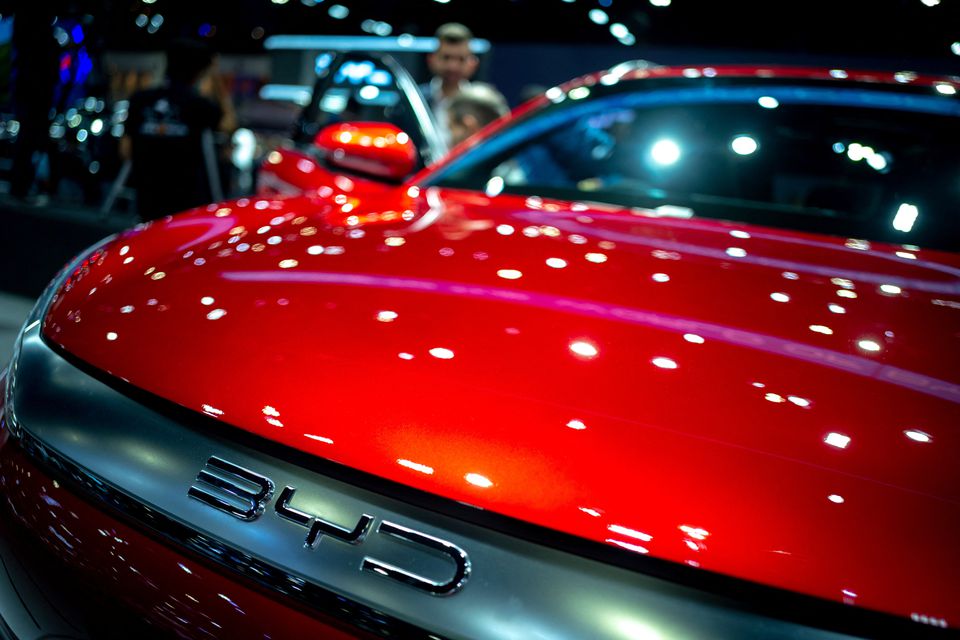 While BYD has not fully articulated its global ambitions in public, a concerted worldwide push has become the single most important strategic focus for China’s biggest EV maker, four sources familiar with BYD management’s thinking said.

Besides a drive into some European markets already underway, BYD spent much of last year conducting a study on how to set up a U.S. distribution network for its latest electric models, two of the sources said.

They described the study as advanced and serious, with specific recommendations from Detroit-based consultancy Urban Science on how many outlets in each state and city BYD would need, as well as formats for the brick-and-mortar stores.

The momentum was building towards an announcement at this year’s global CES tech show in Las Vegas, where BYD was planning to showcase a new generation of battery electric vehicles (BEVs) and plug-in hybrids for the U.S. market, a BYD official said.

Tense relations between Washington and Beijing, anti-China sentiment in the United States and President Joe Biden’s move to prioritise home-grown production of EVs and batteries all pushed BYD to hit the pause button, one of the sources said.

BYD’s management has yet to give the project a final green light and an aggressive U.S. expansion remains unlikely for the foreseeable future, the source said.

“BYD is taking a cautious approach to the U.S.,” the person said. “Think about all the U.S.-China political tensions and then think about the craziness of the whole world now. You don’t want to jump into a big mess.”

BYD’s U.S. project was complicated by the Biden administration’s Inflation Reduction Act (IRA), which imposes rules on where to source battery materials and disqualifies EVs produced outside North America for a $7,500 purchase rebate.

“Who would start selling cars with a $7,500 disadvantage?” said another of the sources.

BYD, which stands for Build Your Dreams, was the world’s biggest seller of BEVs and plug-in hybrids in 2022 with a total of 1.86 million sales – the vast majority in China and well ahead of Tesla on 1.3 million overall.

BYD still trails Tesla in terms of fully electric cars by almost 400,000, though the Chinese company is planning to ramp up sales quickly at home and abroad, having already increased its BEV sales by 184% in 2022 from the previous year.

To be sure, BYD is not the only Chinese company in the auto sector to rein in its U.S. ambitions because of the geopolitical backdrop and moves by Biden to promote local production.

Chinese battery giant CATL (300750.SZ) has slowed its planning for investment in battery plants in the United States and Mexico due to concerns the IRA rules on sourcing materials would drive its costs higher.

U.S. firm HAAH Motors Holdings tried to import cars designed by China’s state-owned Chery Automobile and came up with plans for a U.S. factory that would bring jobs to America.

But the two pulled the plug in 2021 when HAAH could not raise enough money to follow through, due to what executives described as concerns over U.S. tariffs and trade tensions.

BYD has been making electric buses in the United States for years and supplies cities such as Los Angeles and Long Beach from a factory in Lancaster, California, built a decade ago.

But when it comes to EVs, BYD’s leaders, including Chairman Wang Chuanfu, knew as recently as five years ago that their cars were not ready for the global market, due to their quality and other deficiencies, two of the sources said.

They have since done a U-turn.

Leveraging its latest range of electric cars such as the Han sedan and the Tang crossover, BYD has stormed into a commanding lead in China, and made inroads into other markets starting with Norway in 2021, and now including Australia, Britain, Brazil, Costa Rica, Germany, Japan, Mexico and Singapore.

BYD is banking on lower costs than most rivals to eventually overtake the world’s biggest carmaker – Japan’s Toyota (7203.T) – as EVs become the cars of choice.

In the medium term, BYD, which is backed by Warren Buffett’s Berkshire Hathaway (BRKa.N), is shooting for more than 3 million car sales a year worldwide, two of the sources said.

BYD did not respond to requests for comment about sales targets.

Global consultancy LMC Automotive believes the idea of selling more than 3 million vehicles before 2030 is not far-fetched, although it said most sales would still be in China.

LMC said BYD’s ability to offer a full range of globally attractive and well-priced full EVs in mainstream and premium markets made its sales aspirations credible.

Zhang Wei, founder of Yuanhao Capital Management and BYD’s 10th biggest shareholder as of the first quarter of 2022, believes BYD’s prospects should be even better.

He told Reuters the 3 million target would be within reach by around 2025 and BYD should be able to sell 10 million vehicles a year by the early 2030s.

Zhang, who began building a sizable stake in BYD around 2015, told Reuters he likes the company because its chairman has created the kind of vertically integrated, cost-competitive electric carmaker Elon Musk is still struggling to achieve.

Unlike many rivals, BYD can meet most of its battery and EV systems needs alone. It sources key battery materials in part from its mines in China and makes its own batteries and semiconductors, including the power-management chips that are crucial components in EVs, Zhang said.

“Other than windshields and tires, they can make on their own just about everything in the car. They have their own construction company that helps build factories. That’s how they can speed things up,” he said. “I would say BYD at this point is already better positioned than Tesla in the EV era.”

According to two Toyota officials who are close to Toyota’s joint R&D centre with BYD in Shenzhen, BYD’s product development cost is 20% to 30% lower than at the Japanese carmaker.

“The high level of vertical integration in its battery supply chain gives it a clear cost advantage over similar carmakers, an enabler for rapid expansion both within and outside of China,” LMC analyst Al Bedwell said.

Still, even though BYD is taking a cautious approach towards the United States now, it will likely focus on the U.S. car market in the longer term, the sources said.

“America is going to be a key, key part of this global push strategy,” one said.