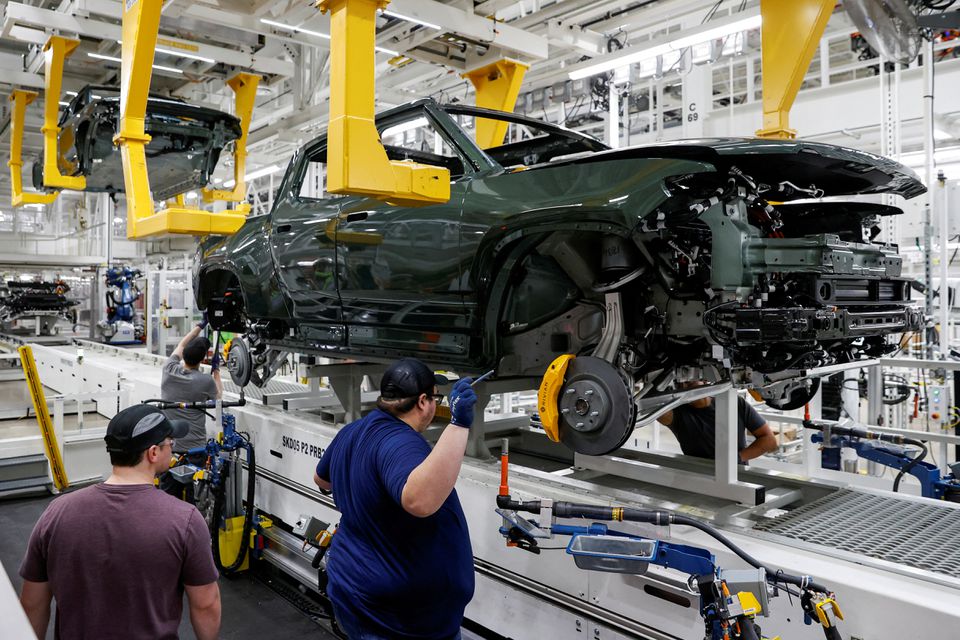 May 23 (Reuters) – When Jeff Wells placed a reservation for a Rivian R1T pickup in early 2019, he was one of the first in line for a truck from the Amazon.com Inc (AMZN.O)-backed electric vehicle startup that at the time promised to tap in to a niche not served by other automakers.

But Wells, an accountant from Southern California, has become increasingly frustrated as he sees others, who placed their order years after him, receive trucks while he keeps waiting.

“It’s just annoying and it feels like there’s no order to how they’re doing things,” he said of Rivian.

Wells is one of dozens of reservation holders who in recent weeks have complained about unreliable delivery timelines and delays in online groups and forums.

The complaints mounted after Rivian Automotive Inc (RIVN.O) in late April said it was changing the production sequence of vehicles, prioritizing those with specific interior and exterior color and wheel options.

“Building in few build combinations reduces complexity with our suppliers and in the plant and allows us to build a greater number of vehicles,” Rivian told customers in an email.

That meant many early reservation-holders sticking with their original color preferences had their orders delayed.

Rivian in a statement to Reuters said delivery dates are not just based on the timing of a preorder, and that it was exploring new ways for customers to expedite deliveries.

Rivian’s delivery headaches have not drawn the same attention as the California company’s slashed production plans or its messy communication of vehicle price increases, which it first announced across the board, but later scrapped for existing reservation holders following backlash.

But delivery woes could prove just as damaging.

While all automakers are struggling with global supply-chain snarls, including a semiconductor shortage and rising raw- materials costs, startups like Rivian have less room to get things right. Large investors, including Ford Motor Co (F.N) and Tiger Global Management, have offloaded Rivian stock after the post-IPO lockup period expired. read more

Rivian’s supporters have largely remained loyal despite the company’s chaotic pricing changes. Preorders have increased to 90,000 vehicles even after the price hikes, which now apply only to new reservations.

But delivery delays could prove costly as other automakers launch their own electric pickup trucks, including Ford Motor Co’s (F.N) F-150 Lightning.

Rivian on May 11 said it was working on overhauling its order system to separate reservations from the configuration process, in an apparent attempt to tackle customer criticism over supply shortages in its order system.

Rivian in the statement said the change allowed for pricing and timing transparency.

‘THE WORLD HAS CHANGED’

Rivian’s struggles to overhaul its ordering system also reflect wider industry challenges. Inflation and supply-chain snarls have shredded financial forecasts and increased pressure on EV upstarts to reduce costs at a time when investors are closing their check books.

“The markets have closed to every company, good and bad. You have to hunker down and set your priorities, and do whatever it takes to get to the other side,” said Daniel Ninivaggi, chief executive at EV startup Lordstown Motors Corp (RIDE.O), which this month sold its plant to Taiwanese contract manufacturer Foxconn (2317.TW) as cash reserves plummeted.

Rivian said it consistently monitored the capital markets and had been planning for an increasingly difficult environment by “optimizing its product roadmap and operating expenses.”

At $16 billion, Rivian boasts significantly more cash than Lordstown and other small EV startups, such as Canoo Inc (GOEV.O), which this month issued a going-concern warning.

But Rivian burned around $1.2 million per vehicle it delivered in the first quarter and is estimated to spend a total of $7 billion in cash this year, according to Morgan Stanley analyst Adam Jonas.

“I definitely wouldn’t put Rivian into the same basket as these other companies, but I think they have a high burden, and they need to show they can deliver,” said Vitaly Golomb, a partner at investment bank Drake Star, who leads its EV and mobility practice and is also a Rivian investor and reservation holder.

While Rivian has told investors it had enough cash on hand to open its second U.S. plant for $5 billion in 2025, patience may be wearing thin.

“Since your IPO, the world has changed dramatically, investors just don’t want to fund negative EBITDA growth companies in this environment,” Jonas said on the company’s most recent earnings call with investors, cutting off Rivian Chief Financial Officer Claire McDonough.

Chief Executive RJ Scaringe and McDonough said the company would bring costs under control by simplifying its vehicle lineup and minimizing expenses.

Scaringe also said Rivian, like some automakers, believed the worst of the semiconductor shortage was behind it. However, other automakers have said the shortage could last into 2023.

Rivian has not said when it expects to manufacture vehicles at a profit margin. The price increases, which boost the sticker of its basic-level pickup from $67,500 to $79,500, are supposed to improve the economics and offset higher raw-materials costs. They apply to orders placed after March 1.

But industry competitors say making a profit even at that price will be challenging.

Peter Rawlinson, CEO of luxury EV maker Lucid Group Inc (LCID.O) and a former engineering executive at Tesla Inc (TSLA.O), estimated Rivian spends around $22,000 on its entry-level battery pack, and around $20,000 on drive trains supplied by Robert Bosch GmbH (ROBG.UL) – requiring a vehicle sticker price of $95,000 to return a profit.

“The only way they could ever make that business model work is if they lose money on every truck they sell,” he told Reuters in March.

Rivian said it was confident about its “pricing journey.” It also said it is working on a lower-cost in-house motor and new battery designs.

For Rivian reservation holder Wells, profit margins matter less. He just wants to get his hands on a truck as soon as possible. While he said he prefers Rivian’s R1T, Wells last year also placed a reservation for the F-150 Lightning made by Ford.

“At this point, if Ford comes through first, I think I’ll go with them,” Wells said.