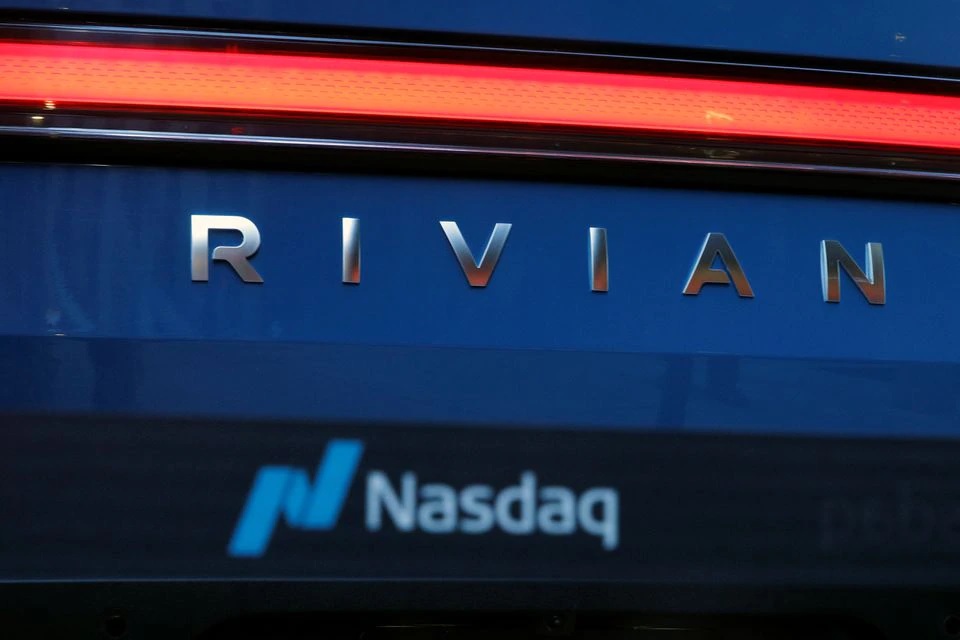 Nov 10 (Reuters) – Shares of Rivian Automotive Inc (RIVN.O) surged as much as 53% in its Nasdaq debut on Wednesday, giving the Amazon-backed electric vehicle maker a market valuation of more than $100 billion after the world’s biggest initial public offering this year.

That made Rivian the second most valuable U.S. automaker after Tesla Inc (TSLA.O), which is worth $1.06 trillion. Despite just having started selling vehicles and having little revenue to report, Rivian ranked ahead of General Motors Co (GM.N) at $86.05 billion, Ford Motor Co (F.N) at $77.37 billion, and Lucid Group (LCID.O) at $65.96 billion. read more

Rivian also has trouble ramping up production in Illinois as supply-chain constraints have hit automakers globally. Last July, the EV maker said COVID-19 and its impact on suppliers had delayed the launch of vehicles out of Illinois.

Since last year, EV companies have emerged as some of the hottest investments. Including securities such as options and restricted stock units, Rivian’s fully diluted valuation exceeded $106 billion at its debut price.

The IPO allowed Rivian to raise about $12 billion to fund growth, and that figure could rise to $13.7 billion if the full over-allotment of shares is exercised. This makes it the biggest U.S. IPO since Alibaba Group Holding Ltd (9988.HK)went public in September 2014.

“The transition to a public company (and) the growth in our capital base” enables Rivian to develop “promising products and volume and growth in terms of new segments and new vehicles that we’ll be going into,” Rivian Chief Executive R.J. Scaringe said in an interview.

Wall Street’s biggest institutional investors, including T. Rowe Price (TROW.O) and BlackRock (BLK.N), are betting on Rivian to be the next big player in a sector dominated by Tesla Inc (TSLA.O) amid mounting pressure on automakers in China and Europe to eliminate vehicle emissions.

Amazon.com Inc (AMZN.O) is Rivian’s largest shareholder with a 20% stake.

Rivian’s IPO comes against the backdrop of the United Nations Climate Summit, where automakers, airlines and governments unveiled a raft of pledges to cut greenhouse gas emissions from global transport.

GM CEO Mary Barra on Wednesday said Rivian’s IPO only showed how undervalued her company is.

“What it highlights to me is the huge opportunity,” she said at a New York Times event. “General Motors is so undervalued.”

Rivian has been investing heavily to boost production, doubling down on its upscale all-electric R1T pickup truck launched in September. It plans to follow that with an SUV and delivery van, hitting some of the hottest segments in the market.

The Irvine, California-based company plans to build at least one million vehicles a year by the end of the decade, Scaringe said. It has a plant in Illinois, and has announced plans to open a second U.S. factory and eventually setting up production in China and Europe.

“Rivian is in the early stages of delivering its first vehicles to customers, which tells investors the company and vehicles are ‘real’ and not merely pictures in a slide deck,” D.A. Davidson & Co analyst Michael Shlisky said. “This has been an issue with other EV companies in recent months.”

On Wednesday, 10 environmental and advocacy groups, including Sierra Club and Greenpeace, urged Rivian to engage with labor unions as the company grows. Workers at Rivian’s plant in Illinois are not unionized.

Founded in 2009 as Mainstream Motors by Scaringe, the company was renamed in 2011 as Rivian, a name derived from “Indian River” in Florida, a place Scaringe frequented in a rowboat as a youth.

Scaringe will hold all outstanding Class B common shares after the IPO and get 10 votes per share, Rivian said in a filing.

Rivian, also backed by Ford, priced an upsized IPO of 153 million shares at $78 per share, raising nearly $12 billion, making it one of the biggest U.S. IPOs of all time. Ford declined to reveal plans for its Rivian stake of about 12%, which was worth about $10 billion on Wednesday.

Amazon, T. Rowe Price, Franklin Templeton, Capital Research and Blackstone are among a group of “cornerstone investors” which are indicated to buy up to $5 billion worth of shares, according to the filing.

Morgan Stanley, Goldman Sachs and J.P. Morgan were the lead underwriters for the offering.