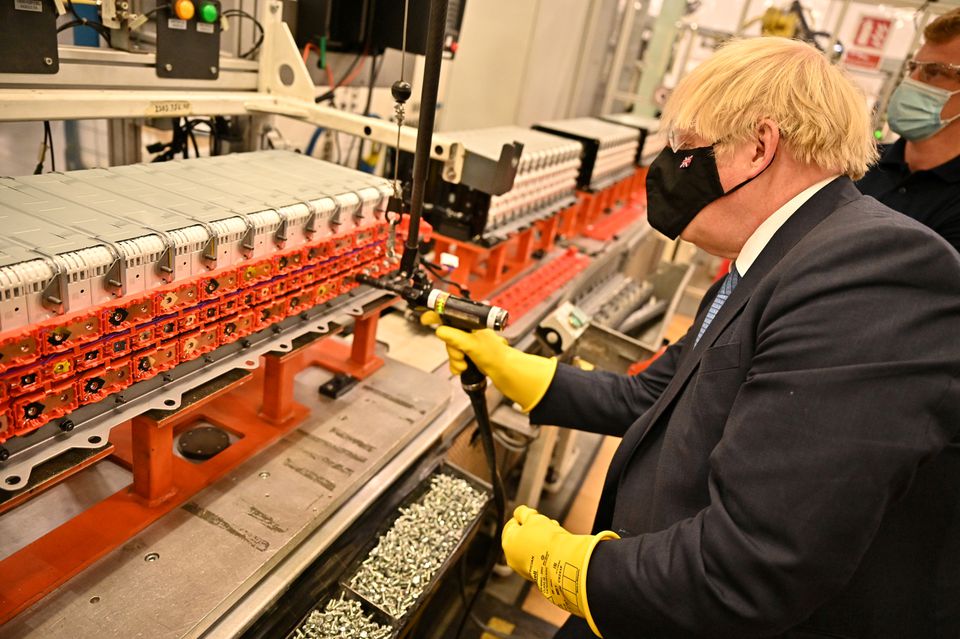 Britain has set a fast pace in the electric vehicle race with its 2030 ban on sales of new fossil fuel-powered cars and has offered 1 billion pounds ($1.4 billion) to jump start its battery industry and associated supply chain.

But the cash and the headline-grabbing deadline – which is sooner than many other nations by several years – still leaves it trailing the European Union’s drive to create a supply chain and far behind China, the electric vehicle (EV) battery leader.

The stakes are high for Brexit Britain. To keep selling into the 27-nation EU without tariffs, Britain’s car industry, which employs 170,000 people, must ensure electric vehicles and the batteries that power them meet stringent rules of origin – with up to 70% of input in value terms coming from Britain or inside the EU.

With its 2030 deadline looming followed by its 2035 cut off for hybrids, Britain needs more battery factories – and fast.

Yet, even Nissan’s (7201.T) plans for a 9 gigawatt hour (GWh) battery plant in Britain – hailed by the government when it was announced in July – are dwarfed by two plants being built in Germany alone, Tesla’s (TSLA.O) 50 GWh plant near Berlin and Volkswagen’s (VOWG_p.DE) 40 GWh factory near Wolfsburg.

“We have come rather late to the party,” said Douglas Johnson-Poensgen, chief executive of Britain’s Circulor, who has worked with Volvo Cars and others on building sustainable supply chains.

The Department for Business, Energy and Industrial Strategy (BEIS), at the heart of Britain’s EV investment drive, says it is ensuring Britain remains a world leader in the auto industry.

“We remain dedicated to securing UK gigafactories, and continue to work with investors to progress plans to mass manufacture the batteries needed for the next generation of electric vehicles,” a spokesperson said in an emailed statement.

Meanwhile, the EU is powering ahead to catch up with China and transform its car industry, a major employer across the bloc, including in heavyweights Germany and France.

The bloc, which has proposed an effective ban on sales of new petrol and diesel cars from 2035, has allocated 2.9 billion euros ($3.4 billion) from 12 EU states to support new battery plants. European climate group Transport & Environment says the EU has 38 plants planned or being built, many benefiting from other support measures from the EU or individual governments.

The bloc has identified 42 companies, including U.S. company Tesla and Germany’s BMW (BMWG.DE), for specific roles in the battery supply chain and lifecycle, ranging from supplying raw materials to producing cells or recycling them. read more

Last year, the European Commission proposed laws to ensure sustainable battery production, while Germany has passed a supply chain law on the lifecycle of batteries, with plants to stay close together, helping meet environmental rules and containing costs. Batteries are heavy items to transport.

Britain has yet to match this, although BEIS said it was working on implementing green goals for the auto industry and would publish an infrastructure strategy this year, including on vehicle charging, and proposals on road transport emissions.

But manufacturers say Britain is not moving swiftly enough.

Guy Winter, a partner at Fasken who has advised the government in the past, said Britain needed a “battery czar” to make sure the industry pulled together – a role played in the EU by European Commission Vice-President Maros Sefcovic since 2017.

Winter said failure to provide enough support, whether in Britain or the EU, would hand the race to China, which makes about three quarters of the world’s EV batteries.

Benchmark Mineral Intelligence (BMI) forecasts Britain needs at least 175 GWh of battery cell capacity by 2035 to supply around 3 million fully-electric vehicles. For now, it estimates Britain is way off the pace, with only 56.9 GWh by 2030.

Among the plans, Britishvolt aims to build a 30 GWh plant by 2027. BMI has only included part of that in its target as it expects the British startup to ramp up more slowly.

Britishvolt said building a 30 GWh factory was a challenge but a spokesperson said its strategy of building in three 10 GWh phases would help achieve its target by 2027.

To avoid EU tariffs, British-built cars must meet a range of rules on origin that from 2027 will include a stipulation that 70% of the battery pack comes from the EU or Britain.

Winter said that might not give Britain enough time. “We ended up with a period to achieve a transition which now looks too short,” he said.

So far, Britain has succeeded in nurturing small battery supply chain startups via projects like the Faraday Institution, which trains battery scientists and engineers, said Steven Meersman, founder of Zenobe, itself a startup that manages batteries on large EVs and extends their lives via energy storage.

But Meersman said Britain lacked a unified strategy to help startup firms grow and to regulate the EV chain, saying one ministry handled incentives for buying EVs, while a separate regulator managed the vital rollout of charge points.

The Critical Minerals Association, an industry group, has called for a “central coordinating body”.

The Advanced Propulsion Centre, a government and auto industry venture, says it had expressions of interest from more than 120 groups for projects across the battery supply chain.

But its Chief Executive Ian Constance said Britain’s offer of 1 billion pounds of funding, about half of which has been allocated so far, “will run out pretty quickly if we deliver a few of these projects”.