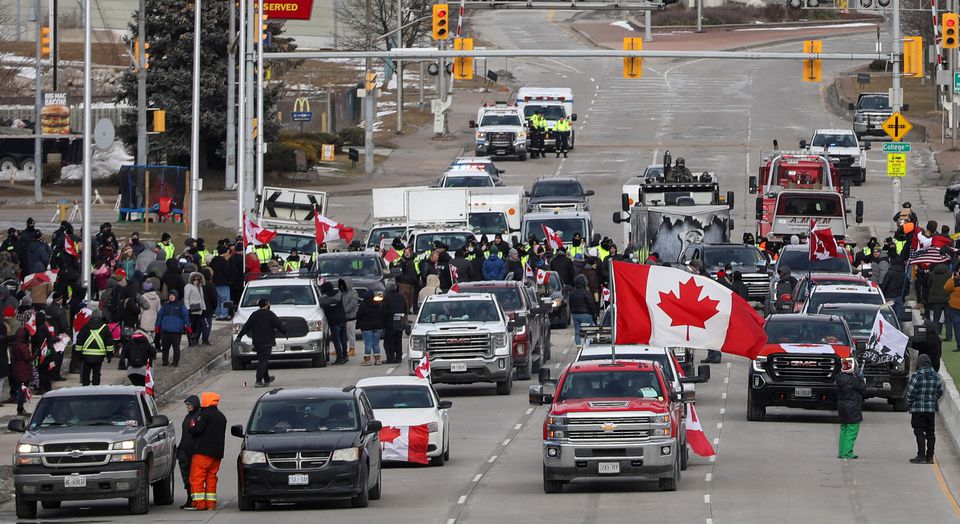 OTTAWA, Feb 24 (Reuters) – A three-week long protest in Canada against pandemic measures that snarled trade and shuttered Ottawa’s core likely cost billions in trade delays, tens of millions in lost sales for businesses, and left behind a hefty policing and clean-up tab.

Hundreds of trucks and vehicles rolled into Ottawa’s sleepy downtown on Jan. 28, blocking off key roadways as convoy members expressed their anger at government with loud, persistent horn honking before police cleared them on Sunday. read more

The biggest hit came from the multi-day blockades of three border crossings between Canada and the United States, which snarled an estimated C$3.64 billion ($2.86 billion) worth of goods.

The Ottawa occupation also shutdown Canada’s fourth-busiest mall, the Rideau Centre, for 24 days, costing an estimated C$70 million in lost sales, according to the Retail Council of Canada. The closure also left scores of mall staff out of work.

With roads blocked off and protesters unwilling to follow basic public health order like masking indoors, many downtown stores and restaurants were also forced to close their doors.

Downtown residents and businesses have filed a C$306 million class action lawsuit against the “Freedom Convoy” for disrupting their lives and livelihoods.

For Happy Goat Coffee, which was forced to shutter three locations, the worst part was the timing. They were on the verge of reopening to in-person dining after being restricted to takeout for weeks due to the Omicron variant.

“The employees, us, everybody was really looking forward to it. And all of a sudden, we get this. So it’s really more damaging than just financially,” said owner Henry Assad, who temporarily laid off 14 workers and estimates the three-week closure cost his business up to C$70,000 in lost sales.

Lost wages for downtown workers unable to pivot to remote work likely added up to about C$264 million, said economist Armine Yalnizyan in a Wednesday column for the Toronto Star newspaper.

The total bill for Ottawa tallied up to about C$30 million, the city’s manager said on Wednesday, which included hefty policing costs. Ottawa Police said they spent more than C$14 million over the first 18 days alone.

While the Ottawa occupation was disruptive for residents and local businesses, the impact to the broader economy was limited, Bank of Canada Deputy Governor Timothy Lane said last week, adding the border closures were more worrying.

The six-day closure of the Ambassador Bridge in Windsor, Ontario, the busiest crossing between Canada and the United States, delayed roughly C$2.34 billion in trade, according to official estimates.

Separate blockades at crossings in Emerson, Manitoba, and at Coutts, Alberta, which ran for six and 18 days respectively, would have held up another C$1.3 billion in trade.

Those closures forced some automakers and auto parts makers to temporarily halt production, and froze the transport of some agricultural products. read more

With Ottawa now cleared and traffic flowing at the borders, analysts do not expect a significant hit to economic activity for the month.

Royce Mendes, head of macro strategy at Desjardins Group, estimates the impact at about a quarter of a percentage point of GDP in February, easily offset by the reopening rebound.

“The month was marked by a tailwind from reopening, so should reveal a solid economic rebound from January,” he said.

Reporting by Julie Gordon in Ottawa; Editing by Lisa Shumaker