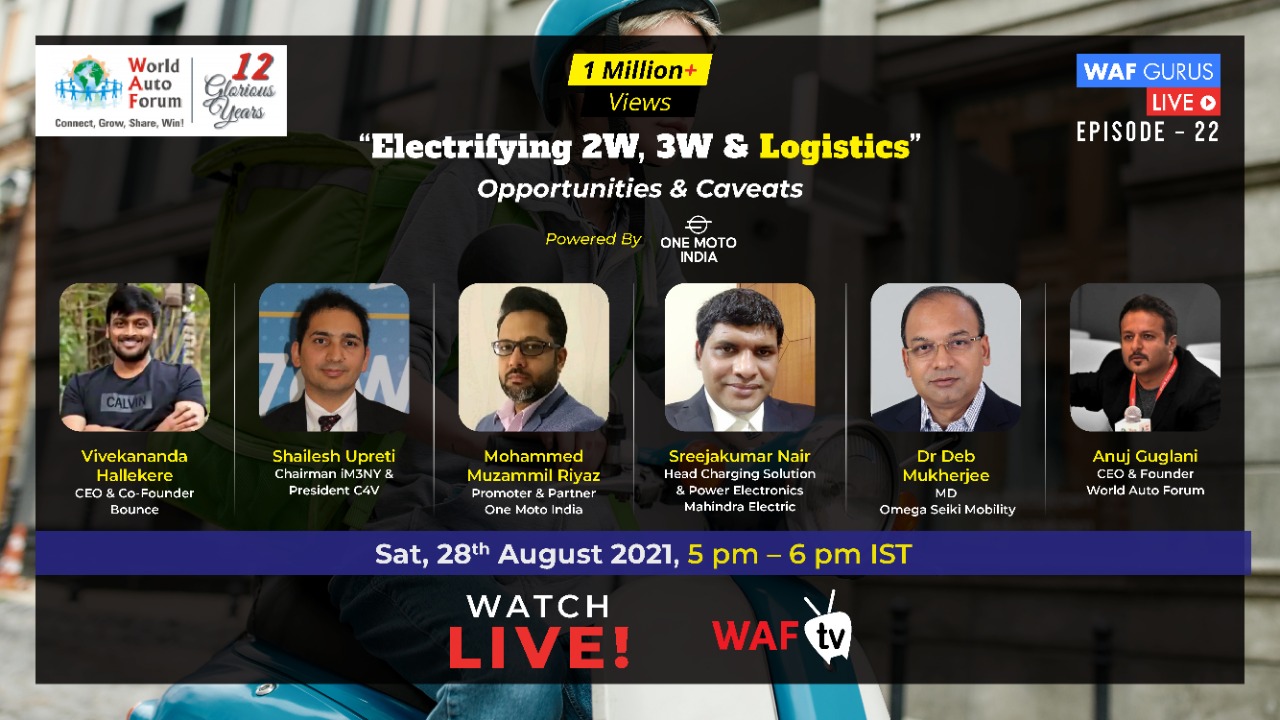 Two- and three-wheeler vehicles are likely to lead the transition to electric technology in India during the coming decade as the cost difference with combustion engine vehicles is narrowing and these vehicles can harness ‘battery swapping’ along with public charging infrastructure, according to the current industry predictions and so it was that the WAF Gurus Live Episode 22- powered by One Moto India was held virtually recently in which Gurus of the auto and mobility industry across discussed this very issue – Electrifying 2 Wheelers, 3W, and Logistics – Opportunities and Caveats.

As the number of EVs increases, there is a need to have a well-defined end-of-life (EOL) strategy for the batteries removed from EVs as part of collective efforts to ensure EV industry is truly green and eco-friendly. The end of life for a battery is exactly that – the moment where the battery reaches the end of its usefulness and/or lifespan and can no longer operate at anywhere close to the peak capacity that you once enjoyed. Recycling has been proposed as the EOL option for the EV batteries, but there are many issues that make recycling less justifiable, and this episode laid out those issues and discussed the alternate and appropriate EOL option.

Anuj Guglani, CEO, World Auto Forum opened the panel discussion by pointing out how the 2 wheelers, 3 wheelers logistics are the low hanging fruits for electrification of mobility. He also sounded the panel on the end-of-life for battery, and stressed that EV cannot be green in the true sense if we end up poisoning Mother Earth with heavy metals. An eco-friendly battery solution is something we need to leave behind for our coming generation.

Mr. Nair of Mahindra noted the changes that have come about in the 2 wheelers and 3 wheelers made in India which seem to be making waves in the markets. He felt the government policy was aligned to the auto industry but needed some more clarity and fine tuning. He was optimistic on the whole and of the opinion that the manufacture of 2 and 3 wheelers is viable and can break even without any government subsidy. He however spelled out that battery swapping might not be a viable solution and what in fact was needed was a hybrid model for these vehicles.

Mohammed Muzammil Riyaz of One Moto India opined that the government policy framework was pretty much in line with what the industry needs and was happy that it was moving in the right direction; and content with the way the government was creating a policy for electric vehicles in India. He was proud of the avant garde products that One Moto had come out with – different, premium and high end on design, and of course performance too. With India launch just round the corner on 15th September, he asked people to watch out for it.

Mr. Vivekananda of Bounce shared how his team at Bounce have already clocked millions of kms on e-scooters. According to him, they are much easier to control as a business. They are exceptionally low on maintenance and the cost of running. He also spoke how they have already done 200 k battery swaps just in the city of Bengaluru. According to him, the burden of battery needs to be taken out of the system for mass adoption of EV. He bets big on ‘battery swapping’ being a key enabler.

Shailesh Upreti of C4V dwelt on the upcoming concepts like energy as a service, innovative campaigns like a charging station coming to your doorstep just the way an Uber does, new battery technologies which are not constrained by energy density and range, have low cost, and the absence of nickel and cobalt- the green battery technology of the future and battery as a service.

Dr. Deb Mukherji of Omega Seiki spoke about the supply chain, the battery technology, the power traits, the efficiency of motors, investments in R&D, and how the motor and battery should be suited to every kind of form factor. He even touched upon the aspect of retailing- how to estimate and increase the market demand, how to give boost through incentives, proper financing, and the need to get together all the stakeholders. He felt that many things were not in place and it was imperative to shape a framework policy for EOL solutions viz cradle to grave, recycling being one to begin with.

WAF Gurus Live! Episode 22 you can watch at WAF TV