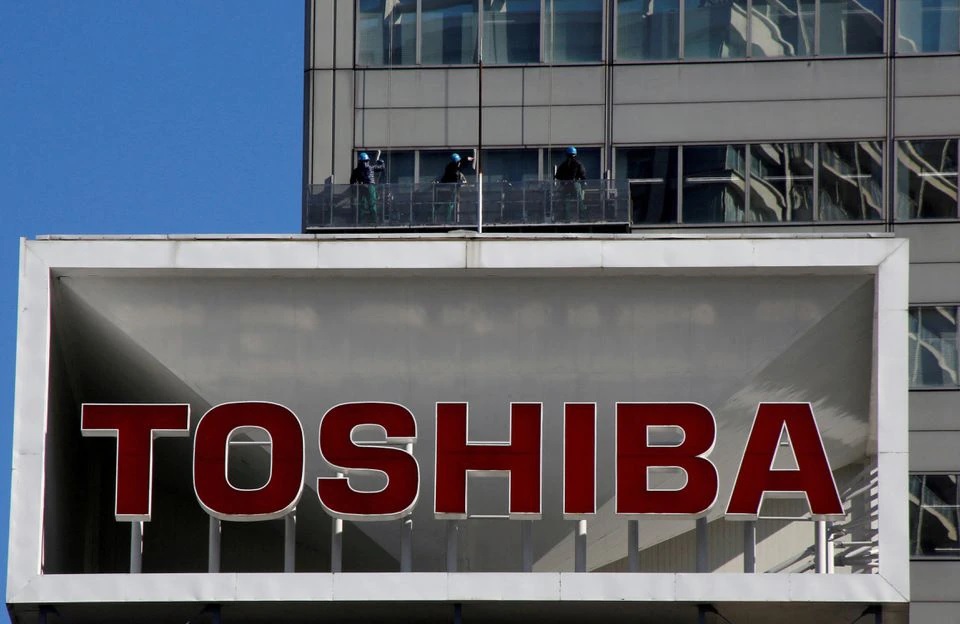 TOKYO/HONG KONG, June 23 (Reuters) – Bidders for Toshiba Corp (6502.T) are considering offering up to 7,000 yen ($51.41) per share to take the troubled Japanese conglomerate private, three people familiar with the situation told Reuters, valuing the deal at about $22 billion.

Toshiba, which is exploring strategic options, said this month it had received eight initial buyout proposals and two for capital alliances that would see it remain listed.

The bidders are now discussing an offer price range of up to 7,000 yen a share with Toshiba’s shareholders, the people said, representing up to a 27% premium to Toshiba’s share price of 5,501 yen as of Wednesday’s close.

The conglomerate’s shares rose as much as 6.5% on Thursday, compared with a 0.1% fall in the benchmark Nikkei average (.N225).

The offer price, if finalised, would value the chips to nuclear reactors conglomerate at 3 trillion yen ($22 billion), at the top end of the range.

A separate source said the range of offers was wide and various conditions have been attached.

Toshiba told Reuters it would not disclose details of the proposals.

A wide bid price range and conditionality suggests that some assets of Toshiba would need to be carved out, or spun out, Travis Lundy, Quiddity Advisors analyst who publishes on Smartkarma, wrote in a report.

If some assets are spun out, that would mean “a lower price for the rest of the basket”, he wrote, adding the up to 7,000 yen per share price suggests that may be the top price in the initial round.

“While everyone probably needed to spend the time and effort getting into the first round, if due diligence and a worsening market environment start to make Toshiba a less interesting candidate for a particular bidder, they can bid to miss in Round 2, by lowering price.”

Reuters reported in December, citing sources, at least one private equity firm had told the Toshiba committee tasked with its strategic review that a deal to take it private could be done at 6,000 yen a share or more.

Some of them may form consortia for a bid, they added.

Bain, Blackstone, Brookfield, Baring, CVC, KKR and MBK declined to comment. Apollo did not immediately respond to a request for comment.

Domestic funds, including Japan Investment Corp (JIC), and a number of strategic players are looking to see how they can participate in the deal, the people said, declining to be named as they were not authorised to speak to media.

If successful, the Toshiba deal would be the largest buyout transaction in Japan since a consortium led by Bain took private the conglomerate’s memory chip unit, Kioxia, for $18 billion in 2018.

The discussions are taking place at a time when a weak yen continues to haunt Japan’s economy, threatening to disrupt Japanese firms’ business plans and turn them into attractive acquisition targets for foreign buyers.

Of all the potential bidders, Bain has been “very aggressive” in pushing for a buyout, said two of the people.

A Japanese investment banker with knowledge of the deal separately said even at 6,500 yen per share the valuation for Toshiba seemed “too stretched”.

Ultimately, he said, the price would have to take into account how investors value Toshiba’s 40% stake in unlisted chipmaker Kioxia.

That gave Bain an advantage over other bidders, he said, because the private equity firm owned the bulk of Kioxia, meaning it would decide the fate of the chipmaker, which in turn would impact the valuation of Toshiba.

Bedevilled by accounting and governance crises since 2015, Toshiba set up a special committee in April to solicit proposals after shareholders voted down a management-backed restructuring plan.

The company said earlier it would shortlist bidders for due diligence after its annual shareholders’ meeting on June 28.