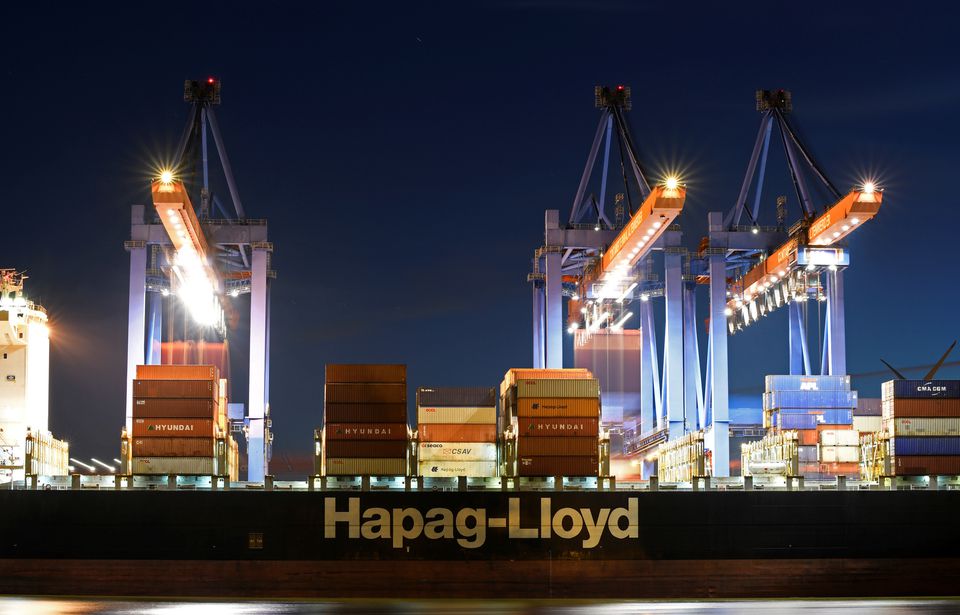 FRANKFURT, Aug 11 (Reuters) – German container shipper Hapag-Lloyd (HLAG.DE) on Thursday posted a net profit of 8.7 billion euros ($8.94 billion) for the first half of 2022, more than three times as much as a year earlier, but said war in Ukraine and the coronavirus crisis somewhat clouded its prospects.

But the forecast remained subject to uncertainties about the war, the COVID-19 pandemic and signs that spot freight rates were beginning to ease, the company said.

Bigger rival Maersk (MAERSKb.CO) last week revised its outlook for demand to the lower end of its forecast range, warning durable goods sales were at a standstill.

“I would agree with Maersk and expect a cooling off from the fourth quarter,” chief executive Rolf Habben Jansen said in an interview with Reuters.

“Across the world, the economy is not developing convincingly and that has a bearing on our business,” he said.

The pandemic has also disrupted logistics, with many ports still congested, infrastructure strained and manpower in short supply, which together is resulting in longer turnaround times for ships and containers.

The first half result – which compared with 2.7 billion euros in the equivalent 2021 period – had been negatively affected by higher expenses for container handling and ship charters, Habben Jansen said.

Also, a 67% increase in shipping fuel prices to $703 per tonne added to unit costs.

Revenues in January-June rose 94% to 17 billion euros, largely thanks to average freight rates of $2,855 per twenty-foot equivalent standard container unit (TEU), up 77% from a year earlier, and also helped by a stronger dollar.

The higher profits would be reflected in future dividend pay-outs and could also be invested, Habben Jansen said.

“But we don’t have to rush that; we could wait for a good opportunity,” he said.