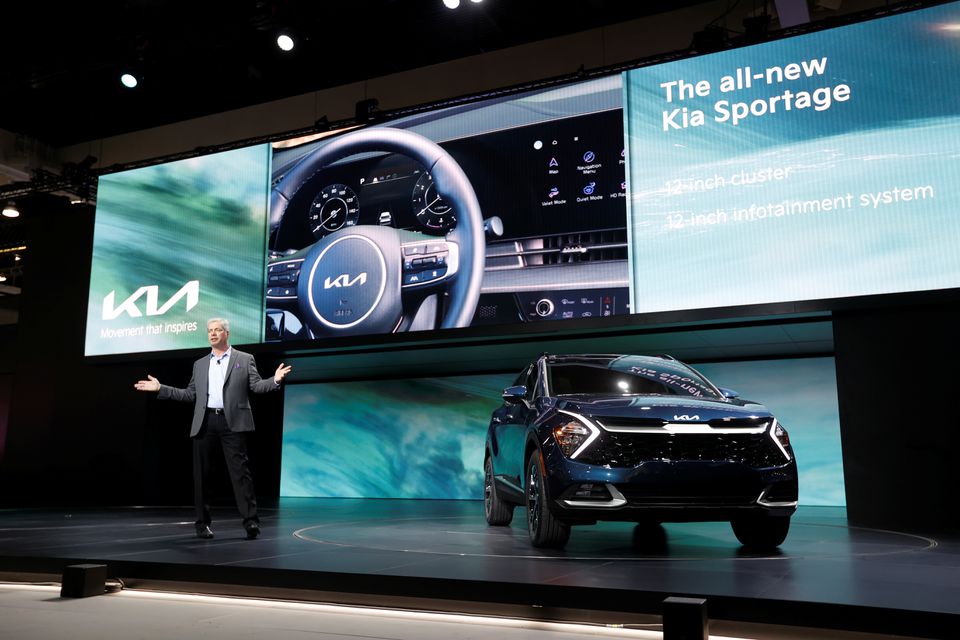 Kia Motors (000270.KS) called out Tesla by name at the show, announcing that its upcoming electric crossover EV6 beat Tesla’s previous record for the shortest charging time, while driving across the United States, by more than five hours.

“They (Tesla) have strong sales and they have a very good public awareness. But not everything is for everybody. So there should also always be an alternative,” said Michael McHale, Kia’s brand experience director.

The focus on electric SUVs reflects the strong preference among U.S. consumers for SUVs, which typically sell for higher prices than similar-sized sedans. Large SUVs account for the top-selling segment in the U.S. market, industry executives and analysts have said.

“EVs are going from econo boxes to aspirational vehicles to the heart of the market,” Brett Smith, technology director at Center for Automotive Research.

Tesla challengers are also betting on novel features such as a rotating dashboard screen in Fisker Ocean SUV to differentiate themselves from the pack.

Henrik Fisker, chief executive of Fisker Inc, said the Ocean will be the first production car with a screen switching between its vertical and horizontal orientations.

“We filed a patent on it,” he told Reuters, adding the screen will be supplied by Foxconn Technology Co Ltd (2354.TW), which will also produce Fisker’s electric SUVs in the United States.

“I think it’s going to appeal to a lot of young people who would love to play around on the screen. Also when you’re sitting charging.”

Fisker and Vinfast also used the show to get on the radar with new models and bold claims that they say will have more affordable, and longer-range vehicles than Tesla’s rival offerings. L4N2S803Q

Tesla has become the world’s most valuable automaker, with a market capitalization of more than $1 trillion, as it has redefined the electric vehicle market with sleek, high-tech cars and SUVs such as the Model Y that boasted longer driving ranges between charges than rival models.

Tesla has taken advantage of its perceived technology edge and strong demand to lift prices for its vehicles, especially as prices for raw materials and semiconductors have risen this year.

Vinfast global Chief Executive Michael Lohscheller, said its vehicles will have “reasonable pricing,” which is key to making people switch from gasoline cars to electric cars.

Fisker said outsourcing production of models to Magna International has enabled the company to shorten development time and thus use the latest, long-range battery technology from supplier CATL.

“The technology is very new. Most other car makers, they choose their technologies three years before the vehicle comes out,” he said.

But it would be challenging for legacy automakers and startups to take on Tesla, which is “synonymous with electric vehicles,” said Smith.

GM, Nissan have launched electric cars, but none of them have made a dent in Tesla’s dominance, said Smith of Automotive Research. Scaling up EVs is another challenge, he added.

“The electric vehicle is opening the opportunity up to a lot of companies, regardless of where they come from,” he said.

“Because Tesla did it doesn’t mean it’s easy, or others are going to do it.”