MG Motor India on Monday said it has joined hands with IIT Delhi’s Centre for Automotive Research and Tribology (CART) for research in the field of electric and autonomous vehicles. 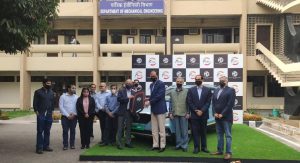 The partnership through Foundation for Innovation and Technology Transfer (FITT), IIT Delhi aims at furthering the automaker’s focus on CASE mobility (Connected Autonomous Shared Electric); through enabling supporting research for deployment of electric and autonomous vehicles in the urban landscape in the country, MG Motor India said in a statement.

The company has already worked in the past with IIT Delhi on a year-long project to boost in-car child safety seat project through geofencing. 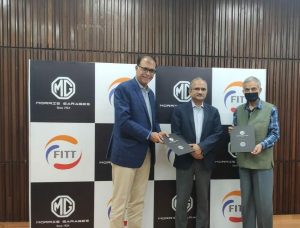 It had also conducted a grand innovation challenge Hackathons in partnership with IIT Delhi amongst students and startups to make automobiles and transportation services safer and greener. MG, which has introduced electric SUV – the ZS EV and the first autonomous Level 1 premium SUV – Gloster, aims to use the research for developing its future autonomous vehicles.

“At MG, our focus has always been around bringing ground-breaking innovations in the automotive space. We are extremely honoured to partner with IIT-Delhi, a force to reckon with in the global technology space. We are confident this initiative will bring significant value to IIT Delhi students in researching autonomous technology in city conditions,” MG Motor India President and MD Rajeev Chaba said.IIT Delhi Director PV Ramgopal Rao said the association with MG Motor India gives the institute a perfect platform to test autonomous vehicles.

“We believe that the future of e-mobility has a great scope for autonomous and connected vehicles,” he noted. 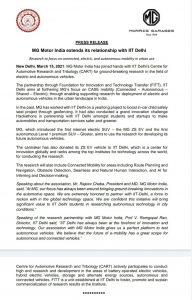