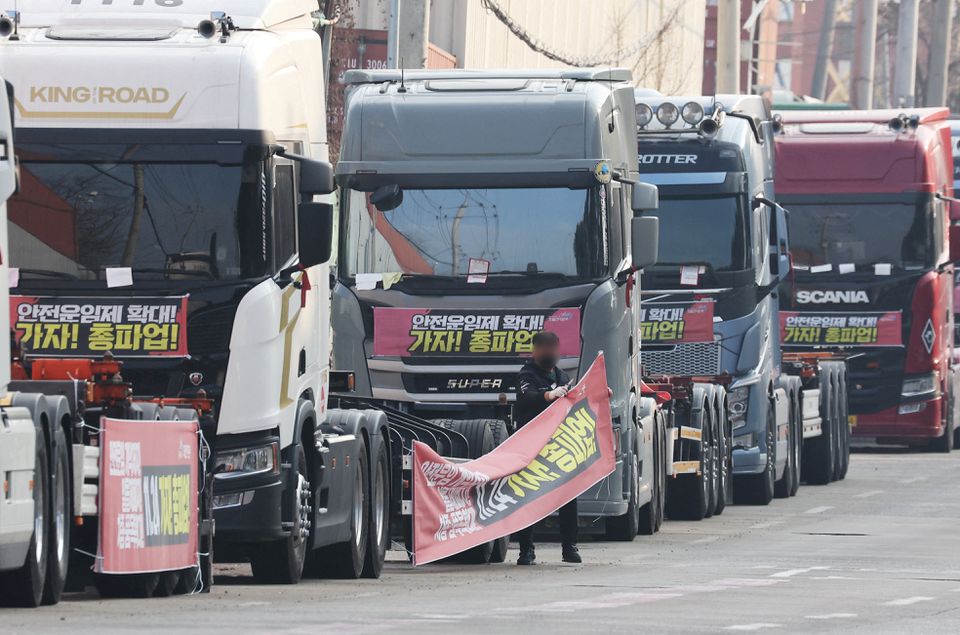 SEOUL, Dec 9 (Reuters) – South Korean truckers voted to end their strike on Friday as it entered a third week with public support waning and the government refusing to budge, saying the action had caused “astronomical” damage to the economy.

Many businesses prepared for the strike, which began Nov. 24, and were ready to weather short-term pain.

And as the government increased pressure – including unprecedented “start work” orders – some of over 25,000 striking truckers headed back to work this week, realising that their bid to widen and make permanent a government scheme on minimum freight rates was failing.

On Friday, the Cargo Truckers Solidarity Union said that 62% of union members voted to call off the strike but that the union would continue its minimum wage campaign.

“The game is over. It is so sad that all we could do is stop our cars, but nothing has changed,” said Kang Myung-gil, a container truck driver who came back to work on Monday after a two-week walkout.

Drivers said they faced the prospect of not only lost income but lost jobs as the strike was prolonged.

“The union fell into a trap that the government buried,” said Kang, who is not a union driver, referring to the government narrative that the strike was devastating the country’s economy, the world 10th largest.

“Then, we, living day by day, just have to accept the reality and move on,” he said.

After the strike ended, President Yoon Suk-yeol’s press secretary Kim Eun-hye said the government would “unwaveringly abide by laws and principles” on labour issues. She said the strike had caused “astronomical damage” to the economy.

This summer, an eight-day walkout by truckers delayed cargo shipments from cars to cement across Asia’s fourth largest economy before it ended with each side claiming it had won concessions.

But this time, the government rejected the union’s bid to expand minimum protections to other kinds of cargo, including oil tankers, package delivery trucks and auto carries, saying drivers were already well-paid. The government has said it would only extend the current wage programme for three more years.

The difference was that Yoon took a harder line than in the first strike, and South Korean industries were willing to suffer short-term losses to keep operations running.

Yoon ordered some drivers back to work, using never-before invoked powers under a 2004 law. He also compared the strikers to North Korea’s nuclear threat and declined to engage with union representatives.

After a start-work order was issued on Nov. 29, traffic at ports began recovering to normal levels, government data shows.

There was no panic buying of gasoline, as most of about 11,000 petrol stations retained sufficient supplies.

A major tyre maker preemptively cleared factory space to store inventory in advance of the strike, a company official said, declining to be identified because of the sensitivity of the issue.

Refineries paid truckers more than double through agents to keep supplies flowing, and temporary workers were hired to get finished Hyundai and Kia cars to local customers, drivers and a transport ministry official said.

Striking drivers such as Kang faulted the union’s leadership for not pushing for more during the first strike in June.

“Our union leaders shouldn’t have walked away without any firm agreement in June. They didn’t see their counterpart could change completely this time, but just left their own people bleeding out,” said a unionised fuel tank driver, asking not to be named because of the sensitivity of the matter.

At the Uiwang container depot near Seoul where about 100 striking truckers were camped out, the drivers packed up and some left in tears, taking down banners.

Yoon’s hard line on labour has accompanied a rise in his approval rating since the strike began, recent data show.

A Gongjung poll released on Thursday showed the president’s rating had jumped by more than 9 percentage points to 41.5%.

“Yoon’s tough stance won the hearts of some elderly conservatives that have long been antagonistic about labour unions,” said Kim Mi-hyun, head of pollster R&Search.

Businesses are also likely to welcome Yoon’s handling of the strike, which could help them keep costs flat when margins are under pressure, analysts said.

“If the government continues to deal with labour issues the way it did with this strike, that would help companies reduce risk,” said Kim Dong-one, a professor of business at Korea University.