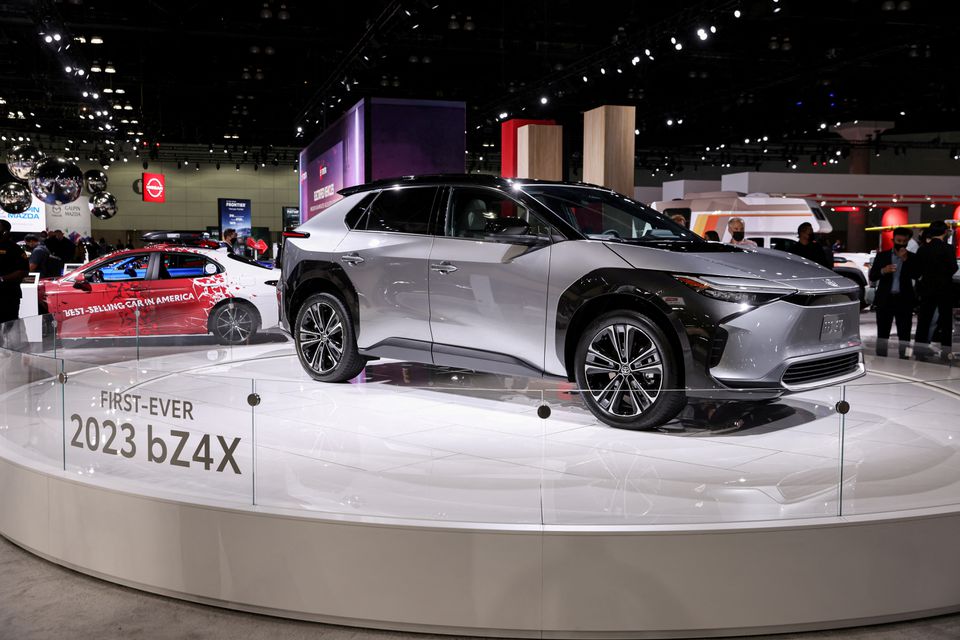 TOKYO, May 12 (Reuters) – Toyota Motor Corp (7203.T) rolls out its first mass-produced battery electric car in Japan on Thursday for lease only, a strategy the automaker says will help ease driver concerns about battery life and resale value but has raised analysts’ eyebrows.

Gasoline-electric hybrid models remain far more popular in Toyota’s home market than electric vehicles (EVs), which accounted for just 1% of the passenger cars sold in Japan last year, according to industry data. Still, the market is growing fast and foreign automakers including Tesla Inc (TSLA.O) are making visible inroads on the streets of cities such as Tokyo.

Bundling insurance, repair costs and a battery warranty into the deal, Toyota will lease the bZ4X sport utility vehicles (SUV) at the equivalent of $39,000 for the first four years. Cancelling in the first 48 months will mean an additional fee.

While EV acceptance has been slow in Japan, that will change, and Toyota could risk losing market share by focusing on a model of leasing rather than purchasing, said CLSA analyst Christopher Richter.

“Anything you are doing that’s making it harder to buy is maybe not a good thing,” he said.

“It’s a strategy I am not that fond of. It does signal that Toyota is taking the home market a little bit for granted.”

Toyota said in December it would commit 8 trillion yen ($62 billion) to electrify its cars by 2030.

Toyota aims to lease 5,000 of the SUVs in the current financial year – around the same amount of EVs that analysts estimate Tesla sold in Japan last year.

The automaker plans to start selling the bZ4X in other markets later this year, and pre-orders have already started in some European countries.

Toyota has not decided when it will start selling the cars in Japan, a spokesperson said.

First-time customers are concerned about battery life and the potential fall in the trade-in value over time, said Shinya Kotera, president of KINTO, the Toyota unit offering the leases.

“It’s our role to dispel anxiety” toward EVs, he said.

Imports of battery EVs jumped almost three times to a record 8,610 vehicles in 2021, according to industry data. Analysts estimate roughly 60% of those were Teslas.

Toyota pioneered the hybrid more than two decades ago and retains big ambitions for both hybrids and hydrogen-powered vehicles, even as it is investing more to boost its battery EV line-up.

Rival Nissan Motor Co (7201.T) pioneered mass-market EVs with the Leaf in 2010 but will launch only its second battery EV model, the Ariya SUV, also on Thursday. The Ariya will be sold for the equivalent of $41,500, not including a government subsidy.

Honda Motor Co (7267.T) in April laid out a target to roll out 30 electric vehicle models globally by 2030. read more