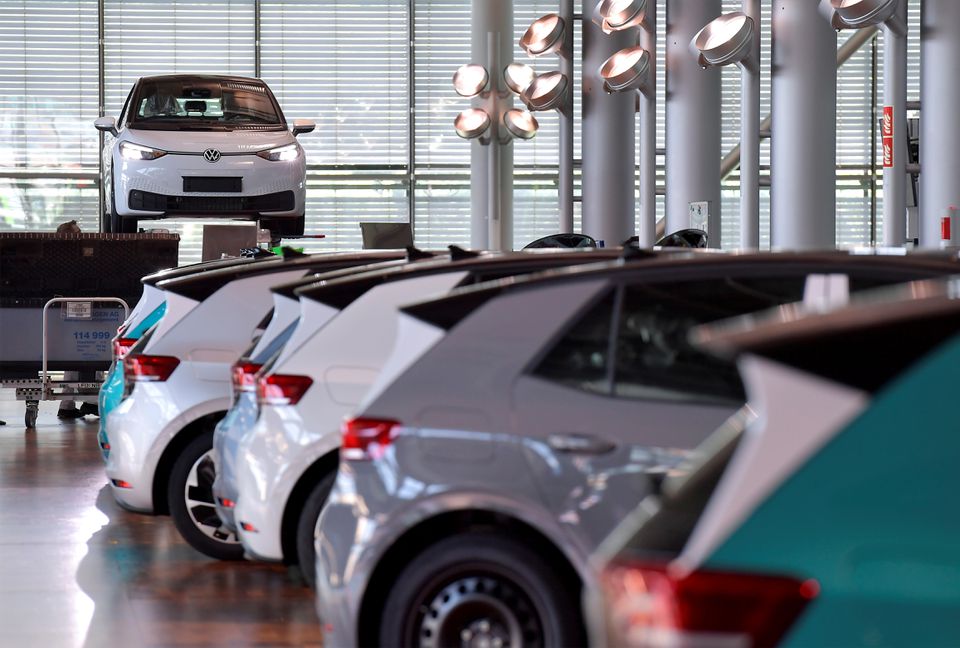 European stocks hit record highs, taking their cue from the positive outlook and increased investor payouts offered by many companies reporting on one of the busiest days on the financial calendar.

There were some clouds on the horizon — strong sales figures from Swiss foods group Nestle (NESN.S) and brewer Anheuser Busch InBev (ABI.BR) were offset by concerns about the impact of higher costs on their businesses.

Volkswagen trimmed its estimate for an increase in car deliveries to customers because of a shortage of computer chips, and Finnish telecoms equipment maker Nokia (NOKIA.HE) also warned that the same issue was putting the brakes on its healthy growth. read more

But business is clearly picking up from the lows of 2020 when efforts to contain the coronavirus forced consumers to stay home and businesses to cut output.

Analysts at investment house Pictet said equities in developed markets were enjoying “a positive feedback loop in 2021, with stronger economic recovery increasing sales growth, improving margins and earnings set to rebound by 40% in 2021 in the US and Europe.”

Airbus, now the world’s largest planemaker, led the way by doubling its full-year profit forecast and raising the outlook for jet deliveries.

Shell boosted its dividend and launched a $2 billion share buyback programme after a sharp rise in oil and gas prices drove second quarter profits to their highest in more than two years.

It joined peers TotalEnergies (TTEF.PA) and Norway’s Equinor (EQNR.OL) in announcing share buybacks as companies throw off more cash than they can reinvest.

Figures earlier in the week showed the luxury goods industry has rebounded strongly since the start of the year, fuelled by robust demand in Asia and the United States for European brands such as Louis Vuitton and Gucci. read more

The prospect of higher interest rates, combined with the risk of increased regulation, has dragged on investor sentiment in the tech-heavy U.S. markets, giving indices across the Atlantic an edge.

“In Europe, having more industry than tech is good for index profits, which I expect to be revised upwards,” said Angelo Meda, head of equities at Banor SIM in Milan.

Quarterly revenue at AB InBev, whose brands include Budweiser and Stella Artois, rose above pre-pandemic levels as bars reopened around the world and drinkers emerged to toast the end of lockdown.

Monetary policy experts around the world are pondering how to respond to higher costs and debating whether the trend is temporary or more deeply rooted. read more

“Inflation has been virtually absent for a number of years and then pointed up very sharply. It hit us directly,” said Nestle CEO Mark Schneider, adding he believed the problem was transitory.

Smurfit Kappa (SKG.I), one of the world’s biggest packaging groups, warned on Wednesday that prices would keep climbing.

“It’s very hard to see that inflation is not here to stay. Since the end of last year I’ve been saying we’re seeing very significant increases and it’s hard to see that they’re temporary because there is still so much demand out there,” CEO Tony Smurfit told Reuters.

There are also concerns that coronavirus could once again upset the best laid business plans, given the risk posed by the Delta variant.

“COVID-19 is not over,” Airbus Chief Executive Guillaume Faury told reporters on Thursday.

“Levels of vaccinations are very diverse around the world and we cannot exclude that after the Delta variant there will be another one, so we believe we have to remain very prudent,” he said.

“It is going to a bumpy road in terms of recovery.”
Additional reporting by Danilo Masoni in Milan; Writing by Keith Weir; Editing by Carmel Crimmins