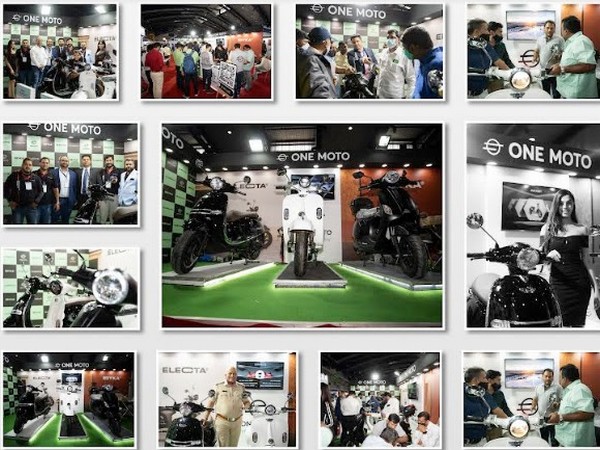 Hyderabad (Telangana) [India], December 9 (ANI/NewsVoir): Optimizing on the successful launch of the One Moto EV’s in India, the EV’s were publicly put on display for the first time in India at the Green Vehicle Expo in Bengaluru from November 27-29 2021. With a massive turnout of over 15,000 people at the One Moto stall, the Expo has proven to be a major boost for One Moto Lovers with visitors crowding in for the viewing and information of the vehicles.

The EV’s have gained huge popularity among the crowd owing to their stylish designs and standout features. Among the major goals of One Moto India is to create a sustainable society that has the ease of adaptability. The charging capacities and the low carbon footprint that the EV’s yield have been the defining features for their popularity.

Among personalities lending acclaim to the vehicles was also the Spiritual Guru, Sri Sri Ravishankar that showed a special preference to Electa. The Electa was clearly a customer favourite with most of the visitors checking out its specs, while Byka was lauded for its design and comfort. The Commuta is the most economical of the lot, creating a complete package for the consumers to choose from. One Moto India has always stressed about the quality factor weighing more than the cost, the interest generated by the more exorbitant of the 3 models launched has proved that consumers are willing to spend on the quality &amp; style factor contrary to the myth about economical costs being a prime reason for demand. The Expo was also graced by the Karnataka Government Industries Minister, Murugesh Nirani with keen interest in the EV’s and their impact on the environment. Among the attendees were also several EV Enthusiastic influencers that ardently analyzed the EV’s in terms of Speed, Performance, Charge, Safety and Digital compatibility.

One Moto India’s participation in the Green Vehicle Expo-Bengaluru has proved extremely lucrative with the team engulfed with over 1500 Queries for dealerships all over India. The response has driven the company into a fast forward mode to finalize the dealerships all over the country to satisfy consumer requirements. Furthermore, the team has received over 5000 bookings during the Expo itself and has already set a delivery date for them.

The Operations team for One Moto India managed by Aditya Reddy and Syed LiaqatUllahwho have been leading the Manufacturing front as well have stated they are well on their way to meet the set deadlines and expand plans to further charging stations, invest more heavily on customer demands. They have been diligently finalizing dealerships and ensuring a smooth end-to-end process for customers and B2B. Talks are also on with the Karnataka and the Telangana Government for setting up manufacturing plants. In more developments, the exclusive Flagship Experience Hubs for the One Moto EV’s are soon to open up in Hyderabad and Bengaluru. With investment already pitching in, aggressive planning is the British EV maker’s strategy to dominate the market has been in full swing. The bookings for the vehicle are open on their website india.one-moto.com.

The EV revolution in India is on and One Moto sure looks like it has already boarded!

This story is provided by NewsVoir. ANI will not be responsible in any way for the content of this article.(ANI/NewsVoir)