So What’s up Carlos Ghosn ?

END_OF_DOCUMENT_TOKEN_TO_BE_REPLACED

ISTANBUL (Reuters) – Turkey unveiled its first fully domestically-produced car on Friday, saying it aimed to eventually produce up to 175,000 a year of the electric vehicle in a project expected to cost 22 billion lira ($3.7 billion) over 13 years. 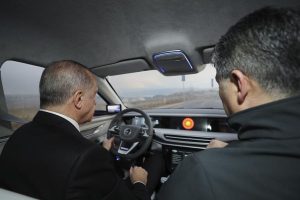 Erdogan drives a prototype of the electric car, in Gebze, Turkey via AP

The project has been a long-time goal of President Tayyip Erdogan and his ruling AK Party as a demonstration of the country’s growing economic power.

Speaking at the unveiling ceremony, Erdogan said Turkey aimed not only to sell the car domestically but also wanted it to become a global brand, starting with Europe.

“We’re all together witnessing Turkey’s 60-year-old dream become reality,” he said, referring to failed plans in the past to build a fully home-produced car. “When we see this car on roads around the whole world, we will have reached our goal.”

Following his speech, a red SUV model of the car and another grey sedan one were raised onto the stage, sporting the TOGG label of the consortium that is building them.

Erdogan said the charging infrastructure for electric cars would be ready nationwide by 2022.

The new project, launched in October, will receive state support such as tax breaks, and establish a production facility in the automotive hub of Bursa in northwest Turkey, according to a presidential decision in the country’s Official Gazette.

Five models of the car will be produced, the statement said, adding the government had guaranteed to buy 30,000 of the vehicles by 2035.

Erdogan first revealed plans in November 2017 here to launch a car made entirely in Turkey by 2021.

In October, Volkswagen (VOWG_p.DE) said it had postponed a final decision on whether to build a car plant in Turkey amid international criticism of an October Turkish military operation in Syria.

Nissan picks Sakamoto as board candidate after Seki’s resignation

TOKYO (Reuters) – Nissan Motor Co (7201.T) has selected executive officer Hideyuki Sakamoto as a candidate for the board of directors, the company said on Friday, following the surprise resignation of vice-chief operating officer Jun Seki earlier this week.

Sakamoto, who was named an executive officer in June and has been an executive vice president since 2014, is responsible for manufacturing and supply chain management at Japan’s No. 2 automaker. Nissan will hold an extraordinary shareholder meeting on Feb. 18, where his appointment will be among proposals submitted for approval, it said in a press release.

The carmaker did not say whether Sakamoto would take on Seki’s responsibilities.

Nissan needs stability as it braces for its worst annual profit in 11 years amid slumping sales in the United States and China, its biggest markets. The company is also working to repair ties with top shareholder and alliance partner Renault SA (RENA.PA), which deteriorated following the ouster of joint chairman Carlos Ghosn a year ago.

(Reuters) – Tesla Inc entered into agreements with lenders in China for a secured term loan facility of up to 9 billion yuan ($1.29 billion), according to a regulatory filing on Thursday.

The electric car maker said it has also signed agreements for an unsecured revolving loan facility of up to 2.25 billion yuan, adding that both the loans will be used for its Shanghai car plant. (bit.ly/2tU35dI)

China Construction Bank Corp, Agricultural Bank of China, Shanghai Pudong Development Bank and Industrial and Commercial Bank of China are the lenders, according to the filing.

Besides construction and production at the Shanghai factory, the loan may also be used to repay the 3.5 billion yuan debt due to be repaid on March 4 next year.

The factory, which is Tesla’s first car manufacturing site outside the United States, is the centerpiece of its ambitions to boost sales in the world’s biggest auto market and avoid higher import tariffs imposed on U.S.-made cars.

Reuters reported earlier this week that Tesla and a group of China banks had agreed to a new 10 billion yuan, five-year loan facility for the automaker’s Shanghai car plant, citing sources familiar with the matter.

Reporting by Ayanti Bera in Bengaluru; Editing by Shounak Dasgupta

NewsWire of Reuters not changed or edited by World Auto Forum

The Ceremony was held as part of the 5th IVASS-  India Vehicle After Sales Summit at NCR- Delhi recently. There were Auto Maker After Sales Heads, their teams & Dealers, Independent Garage Owners, Parts Makers, Distributors, Service Providers, Shared Mobility Providers, Telematics Co and IT Geeks in the Room.

Mr. S Muralidharan is a doyen of the Auto Industry with decades of experience of building organisations, leading teams and grooming leaders.

He has one of the best education the country or the world can offer. He attended Loyola School Jamshedpur, IIT Kharagpur and IIM Bangalore.

He has worked with Bosch Karlsruhe Germany where he grew the European aftermarket for the Brakes business. He was the regional president & board member for Bosch India.

He has also worked as the Executive Director at Frost & Sullivan.

World Auto Forum is privileged and proud to induct S Muralidharan to the Global Hall of Fame at WAF for his immense contributions to the Auto Eco System at India and the World! 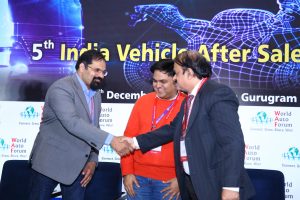 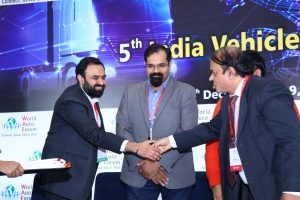 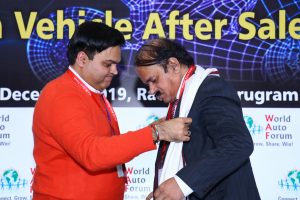 High res Pics for Printing can be downloaded from here :

Mr S Muralidharan had also given a fantastic Key Note address at 5th IVASS India Vehicle After Sales Summit titled “Opportunities in the Supposed Slowdown” which can be watched here :

Dongfeng said on Thursday it had agreed with PSA to extend the duration of their joint venture Dongfeng Peugeot Citroen Automobiles (DPCA).

Under the deal, the venture could get the rights to PSA’s new brands in China and will benefit from new technologies and intellectual properties, the Chinese company said.

END_OF_DOCUMENT_TOKEN_TO_BE_REPLACED

Great Wall, one of the biggest sellers of sports-utility vehicles (SUV) in China, expects to secure a production site in the first half of 2020, likely a General Motors plant in Maharashtra, a source familiar with Great Wall’s plans said.

END_OF_DOCUMENT_TOKEN_TO_BE_REPLACED

Mumbai, 20th December 2019 : Over the next fifteen months, a number of key leaders at Mahindra & Mahindra Ltd. will be retiring. In light of that, and in pursuance of the highest standards of corporate governance, over the past one year the Governance, Nomination & Remuneration Committee (GNRC) of the Board has completed a structured and rigorous review of top management succession, which has now been ratified by the Board of Directors. These changes include the following:

END_OF_DOCUMENT_TOKEN_TO_BE_REPLACED

Mr S N Barman, the Industry Stalwart, has spent close to quarter of a century in the Automotive Industry. He is an IIT Graduate. Extremely focussed, experienced and result oriented professional.

As he moves on from Tata Motors PVBU, he leaves a great legacy behind at the organisation. He has been instrumental in the turnaround of Tata Motor PVBU. Under his aegis, products like Nexon, Harrier, Tiago & Tigor were launched which completely transformed the image and the market performance of Tata Motors in the Highly competitive Car market.