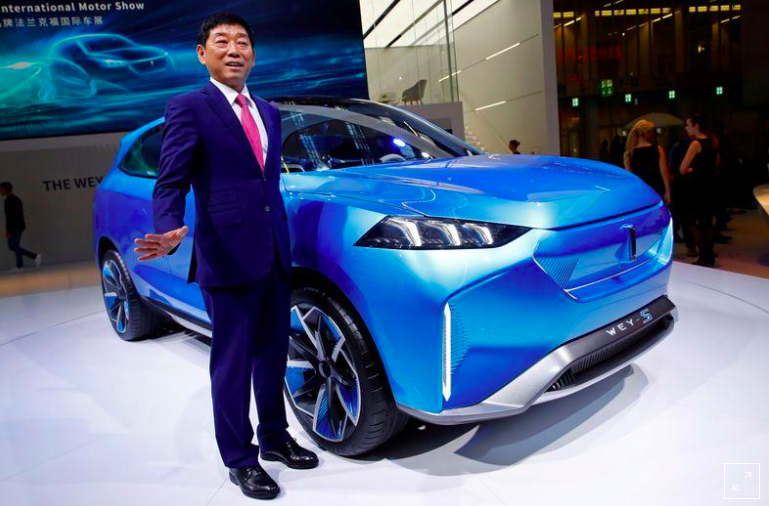 Great Wall, one of the biggest sellers of sports-utility vehicles (SUV) in China, expects to secure a production site in the first half of 2020, likely a General Motors plant in Maharashtra, a source familiar with Great Wall’s plans said.

Buying a factory is seen as the best way to get up and running fast and Great Wall is finalising which SUVs it plans to make in India, including whether to kick off its launch with an electric SUV, the source told Reuters.

Great Wall said it would make an announcement next month about its plans for India but declined further comment.

A spokesman for GM in Detroit said it was continuing to make vehicles for export at its Talegaon plant in Maharashtra state.

“As we have said previously, we continue to explore options to improve utilisation of the plant. We do not comment on speculation,” he said.

Changan, too, is scouting for a production base and has held initial talks with suppliers, sources aware of its plans said. Both automakers, which produce electric vehicles (EVs) in China, are also considering whether to set up EV battery assembly plants in India, the sources said.

The companies see India as a chance to combat slowing sales at home, which fell in November for a 17th month in a row. While car sales in India are stuttering, the market is expected to become the world’s third biggest by 2026, behind China and the United States, according to consultancy LMC Automotive

The Chinese firms also hope to capitalise on gaps left by global automakers such as Fiat Chrysler, Ford Motor and GM which have scaled back plans in a market still dominated by smaller, low-cost cars made by Maruti Suzuki and Hyundai Motor.

“It is an opportune time for China’s automakers to enter India. There is currently a gap in competition and it may take a couple of years for some of the established carmakers to bring new products to the market,” said LMC Automotive’s Ammar Master.

GM’s retreat from India, for example, could help Great Wall get going quickly and it has been in talks to buy GM’s plant in Maharashtra, two of the sources said.

GM stopped selling cars in India in 2017 and has already sold its other plant in Gujarat to SAIC, where the state-owned Chinese automaker now makes the Hector SUV it launched in June under its MG Motor brand.

India is part of Great Wall’s planned global expansion into South America, South Africa, Southeast Asia and Australia, and it also plans to export from their to places such as Europe and the United States, said the source who is aware of its plans.

“The plant in India is expected to be the biggest for Great Wall outside of China,” the source said.

“For global automakers, India is one of the many markets they are in but for the Chinese it is the first major market outside of home and so the level of investment and commitment will be proportionately high,” said the source.

One of the biggest hurdles in India will be fighting perceptions about the quality and reliability of Chinese products and winning over brand-conscious buyers for whom cars are a prestige statement, say analysts.

Chinese smartphone makers such as Xiaomi Corp faced similar perception issues when they launched in India but they now dominate the market. However, cars remain a significant outlay for most Indians and the Chinese brands will need to make their mark quickly.

“Once the likes of Volkswagen and Ford start launching new models in India, the entrants from China could face tougher competition because a lot of buyers in India are still very brand conscious,” said LMC’s Master.

Still, the initial success of SAIC’s Hector SUV has helped. Launched at the end of June it said it had sold more than 13,000 cars by the end of November and plans to sell 24,000 next year.

“SAIC has changed the perception about whether a Chinese brand can be made and sold in India,” said Santosh Pai, partner at law firm Link Legal which advises Chinese companies setting up in India. “Fence sitters are getting in and have realised they can sell in India if the price and strategy is right.”

Lessons for Great Wall and Changan from SAIC’s India launch include marketing the brand aggressively, packing the car with features to differentiate it from rivals and giving extended warranties to dispel doubts over reliability, analysts say.

Another advantage for Chinese carmakers in the coming years will be their EV expertise. With the sale of EVs slowing in China they can deploy some of their existing capacity to India where the government is encouraging clean fuel cars.

SAIC, which will soon launch an electric SUV in India, is also scouting for a second manufacturing site and is expected to make a decision in early 2020, said a source aware of its plans.

SAIC did not respond to a request for comment though the head of its Indian division said in November it was working on an expansion plan and expected its total sales in India to hit 70,000 in 2021.