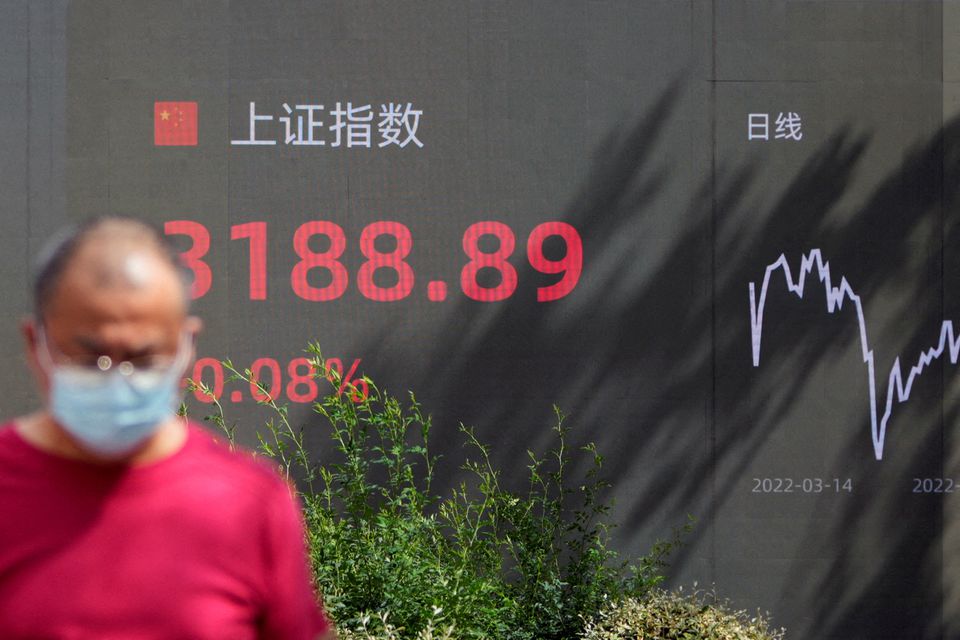 The Federal Reserve will release the minutes from its most recent meeting on Wednesday, which investors will scour for insight into policymakers’ views on the outlook for inflation and economic growth.

The dollar pulled back from strong overnight gains while oil edged up after Monday’s volatile sell-off.

The MSCI All-World index of shares (.MIWD00000PUS) rose 0.2%, putting it on course for a second month of increases – its longest stretch of gains since late 2021.

Chinese equities came under pressure after Beijing shut parks, shopping malls and museums on Tuesday, while more cities resumed mass testing for COVID-19, as cases spiked, which has fuelled concern about the hit to the world’s second-largest economy.

The Chinese capital said on Monday it was facing its most severe test of the pandemic, raising the prospect that the government may have to reimpose strict curbs on mobility and issue stay-at-home orders across other cities.

The dollar of the gains that took it to a 10-day high on Monday, when investors ditched risk assets over China’s COVID flare-ups and was last down 0.2%. The dollar came under pressure in particular against the euro and the yen , which rose by 0.2% and 0.3%, respectively.

“On the Fed side, tomorrow’s minutes will be important to watch, but the recent Fedspeak has undoubtedly added a layer of caution to the dovish pivot enthusiasm, which could mean investors may also be more reluctant to over-interpret dovish signals from the minutes,” ING strategist Francesco Pesole said.

Meanwhile, the OECD said on Tuesday the global economy should avoid a recession next year, but that the worst energy crisis since the 1970s will lead to a sharp slowdown that will hit Europe the hardest.

Still, analysts at National Australia Bank questioned whether demand for the U.S. currency would last.

“Evidence U.S. inflation has peaked and can fall significantly in 2023, together with China and Europe developments, convince us a USD depreciation cycle is now in train,” they said in a note on Tuesday.

U.S. Treasury yields eased across most maturities ahead of Wednesday’s minutes.

Oil rose on Tuesday, a day after Saudi Arabia denied a media report that it was discussing an increase in oil supply with OPEC and its allies.

Brent crude futures rose 1.4% to $88.64 a barrel, having fallen by as much as 6% the previous day, before Saudi Arabia issued its denial and stemmed the decline.

“Markets remain subject to even greater volatility due to a total dearth of market liquidity, as was all too evident in crude oil futures, as they plunged on the WSJ story suggesting Saudi Arabia may propose a very surprising increase in OPEC production at the December meeting, only to fully reverse when this was denied,” ADM Investor Services chief global economist Marc Ostwald said.