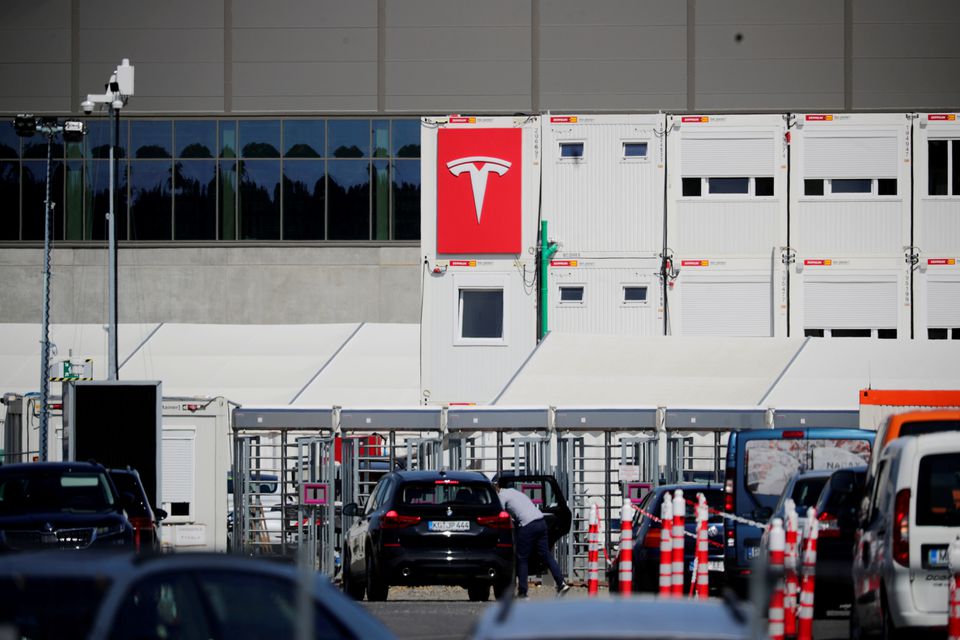 BERLIN, Nov 26 (Reuters) – Tesla (TSLA.O) said on Friday it has withdrawn its application for state aid for its planned battery factory near Berlin as CEO Elon Musk declared the electric vehicle maker opposed all subsidies.

The European Union in January approved a plan that included giving state aid to Tesla, BMW (BMWG.DE) and others to support production of electric vehicle batteries and help the bloc to reduce imports from industry leader China.

Tesla was expected to receive 1.14 billion euros ($1.28 billion) in EU funding for its battery plant in Gruenheide, Brandenburg under the plan, with a final decision likely by the end of the year.

“Tesla has informed the Federal Ministry of Economics and the Brandenburg Ministry of Economics… it is withdrawing its IPCEI application for state funding for the battery factory in Grünheide,” a Tesla spokesperson said, referring to European subsidies allocated to so-called ‘Important Projects of Common European Interest’.

Construction plans for the plant would not be affected by the decision, the spokesperson said.

“It has always been Tesla’s view that all subsidies should be eliminated,” Musk posted on Twitter in response to a tweet by another user after Tesla said it had withdrawn its funding application.

“But that must include the massive subsidies for oil & gas. For some reason, governments don’t want to do that…,” Musk added, deviating from the subject of the factory grant.

Tesla itself is investing 5 billion euros in the battery plant, according to German economy ministry estimates.

Meanwhile, construction of a car production site alongside the battery plant, which Tesla has begun building under pre-approval permits while it awaits final approval from the regional government, has made good progress in the last few weeks, a spokesperson for the federal economy ministry said.

The electric vehicle maker also applied in November 2020 for regional funding from Brandenburg, according to the regional government’s website.

A Brandenburg economy ministry spokesperson said this application had not been withdrawn.

The amount Tesla applied for is undisclosed, but investments worth over 100 million euros are generally given 6.8% of their value, the website says.

The latest round of online consultations for the public to express environmental and other concerns about the car factory and battery plant closed last week and Tesla CEO Elon Musk has said he hopes to formally begin production by the end of the year and then ramp up as quickly as possible.

Musk has made his irritation for German laws and processes known, saying in a letter to authorities in April that the country’s complex planning requirements were at odds with the urgency needed to fight climate change. read more