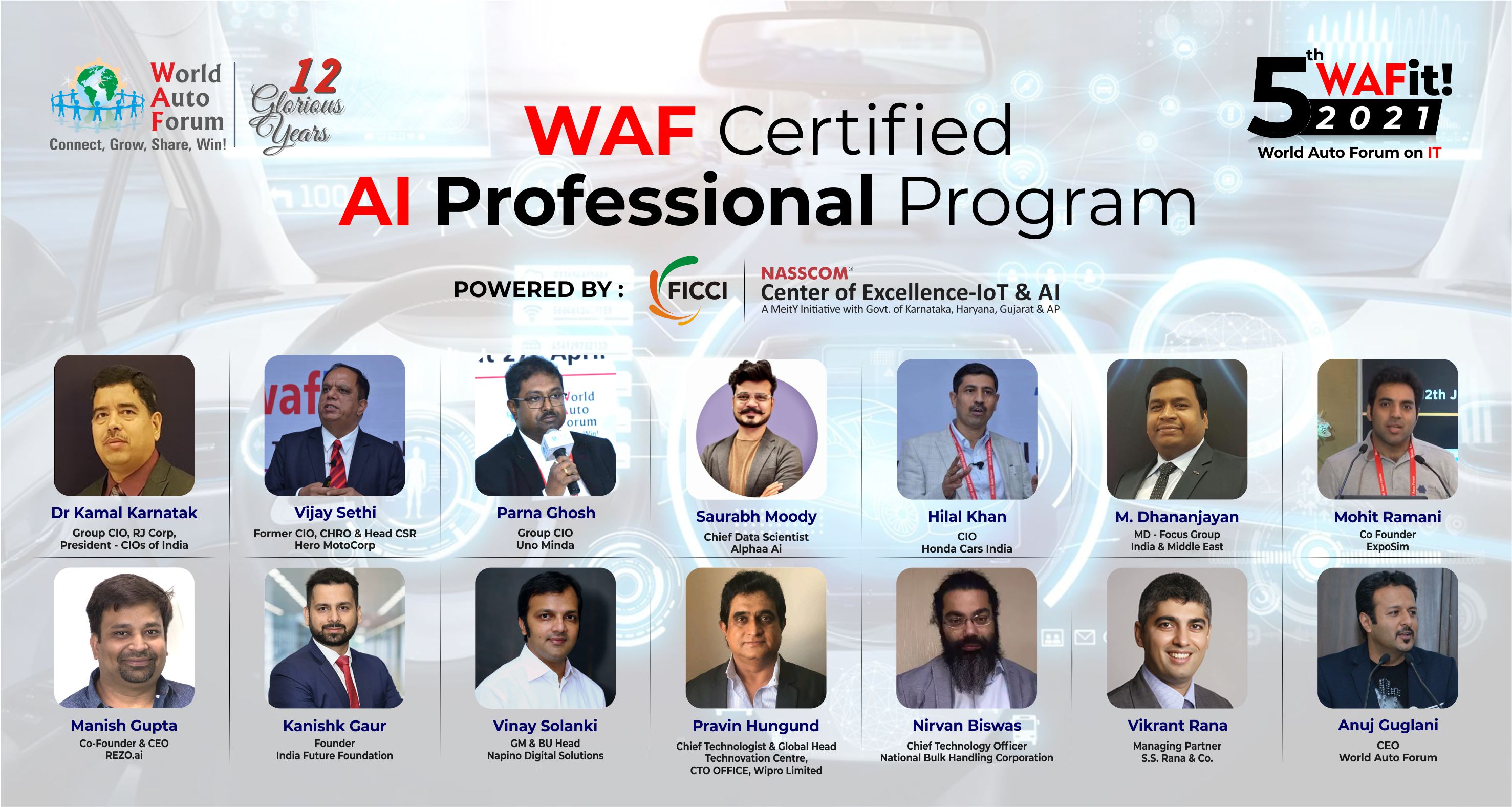 The 5th WAFit (World Auto Forum on Information Technology) powered by FICCI and NASSCOM – Center of Excellence for IoT and AI, was held virtually on Saturday 26 June 2021. The theme of the conference was – AI in Action at Automotive & Mobility with thought leaders from Automotive and IT from across the globe sharing their views on how AI is being adopted by all important stakeholders in a Win-Win way. For attendees there was the three-pronged benefit of learning form Top AI Experts; earning the Prestigious WAF Certification as a Connected Vehicle Professional and getting Placement Assistance at WAF CXO Jobs.

A highlight of the programme was the world’s longest running virtual exhibition on automotive on from 25th April 2020.

Mr. Anuj Guglani, CEO, World Auto Forum welcomed participants and delegates and spoke about WAF’s growing community as more and more people get connected digitally. He gave us a sneak peek on WAF’s many activities, including the new social networking site that is to be launched soon, connecting the who’s-who in the world of automotive and mobility and AI.
The first panel discussed AI in Action. Industry’s Best Use Cases, Learnings & Caveats.

Mr. Parna Ghosh – Group CIO – Uno Minda Group spoke about the role of AI in three areas – Process, People and Products. Referring to EVs and connected cars as computers on wheels, Mr Ghosh pointed out that these will never work without AI. He emphasized the role of AI in predictive maintenance – not only for vehicles but also in managing the shop floor, machines and lines. “AI is no longer a buzzword,” he said as he spoke about companies using AI for intelligent automation and smart organization.

Mr. Manish Gupta, Co-Founder & CEO, Rezo.ai stated that AI is not new in the automotive and mobility sector, and self-driving cars were being tested in Germany as far back as in 2000. He spoke of use cases in manufacturing and logistics, as well as in end-customer usage, and how AI could track driving patterns for safety. He said that AI is the way to make the next growth possible by cultivating a mindset where industry converts generalists into specialists taking growth from 80 to 100%. He concluded by saying that AI is an enabler that can work wonders when the problem is well defined, and change management is done efficiently.

Pointing out that the auto industry as well as IT were going through disruption, Mr. Hilal Khan, CIO, Honda Cars India stated that the Indian workforce is very different from the rest of the world. It therefore becomes important to consider one’s business challenges and prioritise and choose what is more important in terms of business growth and what can wait when implementing AI. Calling this strategy offence Vs defence, he said that it is important to understand how the data available through AI will help in product planning, user-based insurance, or management of inventories.

Talking of innovation and marketing being the two most important aspects of any business, Mr. Pravin Hungund, Chief Technologist & Global Head Technovation Centre, CTO Office, Wipro Limited remarked that AI has moved from being hype to a complete happening environment, especially in the B-2-C world – banks, retail and marketing. Referring to AI as being completely disruptive in industry today, he suggested that AI could help reconfigure production models and consumption. With maturity of AI, AR/VR and creative tech, he felt the industry could shift focus from mass production to mass customization, enabling concepts like spatial computing and design engineering to look at a scalable and elastic design. “It’s the best time to be in the industry,” he concluded.

Mr. Nirvan Biswas, Chief Technology Officer, National Bulk Handling Corporation introduced the interesting concept of AI being IA ie Information Architecture, a term that immediately became a catch phrase. With robust information architecture, one should know where, why and how to use the information, he added. Mr Biswas felt that there was a dearth of engineers, a dearth of use cases examples, a dearth of R&D and even investment, otherwise with the volume of data available, there was no reason why the auto industry could not surpass other industries.

An interesting insight by Mr Vikrant Rana, Managing Partner S.S. Rana & Co. was that law follows business and it is only once business is done that law comes into play. Talking of the issues with AI, he said the most important were ethicality, accountability and liability – Did AI have a persona and who would take responsibility in case of a mishap? Other aspects he touched upon were safety and reliability, data protection laws and aftersales. For laws to keep pace with business, it would be an evolving animal, he concluded emphasizing the importance of having checks and balances by the government.

In his keynote address on Be Prepared for the Future, Dr Kamal Karnatak, Group CIO RJ Corp and President – CIOs of India, sent out a clarion call to all – change with the changing environment in business or become extinct like the Dodo. Elaborating on this statement, he said that AI will kill all that is routine, bringing radical change in the automotive industry. so that every vehicle that moves will be autonomous. As an automotive business AI can be used in our area of influence with the use of the 5E X 5G formula to grow yourself, your team, your business, community and country through education, experiment, experience and expansion.

Mr. Mohit Ramani, CEO & Co-Founder, ExpoSim, in his keynote address on The Future of Conventions & Conferences spoke about the ExpoSim platform and how it is helping the auto industry not only in the Covid era but also how it would be useful beyond this time. Calling it the most advanced virtual events and exhibitions platform, as they cater not just to the need of the visitor or attendee but also to the needs of the organiser and exhibitor – the most important part being networking. He added that sponsor branding, leads for exhibitors, made it flawless and hassle-free event for management, and organisers.

Mr Anuj Guglani, CEO, World Auto Forum, introduced the second panel discussion on the topic Blueprint for Adoption of AI & ML for the Auto & Mobility Industry. Strategies for 5 Pillars: Resources, Tech, Privacy & Security, Govt, Users, walking the panellists through the points of discussion that they were likely to focus on.

The first speaker Mr. Vijay Sethi, former CIO, CHRO & Head CSR – Hero MotoCorp set the ball rolling by calling AI one of the biggest game changers for all. Talking of democratisation of AI, Mr Sethi pointed out that large organisations, though they may initially spend billions on R&D for AI, need an eco-system where even the smallest player is a part of their customer base. This has been made possible due to the existence of cloud, so that a small organisation of even five people can utilize cloud services. He concluded that AI is here to stay and should be leveraged to work for business which gives you maximum value, and cost will balance itself.

Vinay Solanki, GM & BU Head, Napino Digital Solutions started by saying that AI can only be AI if there is data. The new oil, AI can well be garbage in, garbage out without the right data. He spoke of the three Vs of data collection – volume, variability, and veracity. Talking of the eco-system in the automotive industry, Mr. Solanki was of the opinion that the Indian auto industry has been a front-runner in adopting technology rapidly bringing about the marriage of IT and IOT fairly well and quickly. He emphasized that AI can only work if humans can adopt AI – for which the right culture and training needs to be implemented from the shop floor upwards.

Mr Saurabh Moody, Chief Data Scientist – Alphaa AI who works at the deepest levels of AI, pointed out that businesses needed to plug the gap between the availability of technology, including AI, and their knowledge of how to leverage it. Hence every leader in a company needs to be a technology/data person. Mr Moody walked us through the possibilities of the kind of information AI can bring to businesses, highlighting that the benefit of AI is that it keeps evolving with changing data to learn and grow on its own, giving ROI for years to come. He advised businesses to think of AI as an enabler and facilitator to solve problems.

Talking about two things that are very important for the automotive industry – profitability and productivity, Mr. M Dhananjayan – MD Focus Group – India and the Middle East went on to talk about three things which are important before AI is implemented – the connect within your system; building up the right architecture needed for the process; recognising context. The biggest challenge to AI in India, he said, will be to beat the Indian ‘Jugaad’! He concluded with the statement that there is a need to introspect on whether AI is needed; and what the customer wants, adding that you would need a mastermind to adapt the AI mind, especially as fast is the new money.

Mr. Kanishk Gaur, Founder, India Future Foundation spoke about the various risks that AI would pose if it was implemented – it would change the way we do business. AI could be used for massive cyber-security attacks of not just a system or company but the country too. Mr Gaur spoke of the need to guard against the inherent risks in the use of emerging technologies by planning IT, IoT and cloud security especially in the era of EV and communicated vehicles.