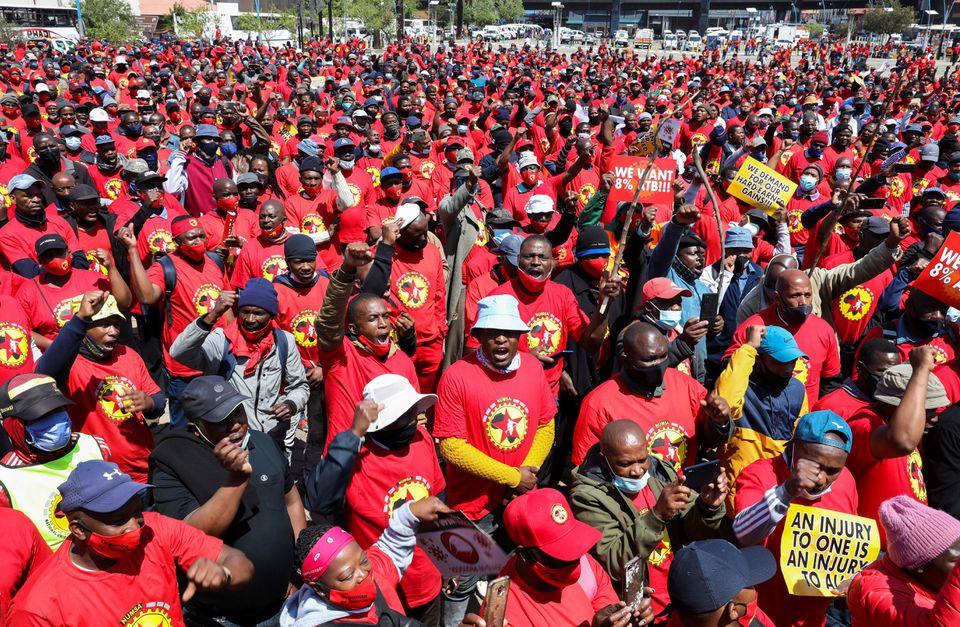 With around 155,000 members organised in the sector, the National Union of Metalworkers of South Africa (NUMSA) has called for a total shutdown of the engineering industry after wage talks with employer bodies reached a deadlock and arbitration failed.

“We are left with no choice but to strike and to withhold our labour indefinitely until the bosses give into our just demands,” NUMSA said in a statement.

The union organised marches and rallies across the country on Tuesday, with thousands attending a march in downtown Johannesburgwhere protesters wearing NUMSA’s trademark red colours held up placards including “An injury to one is an injury to all”.

NUMSA had sought an 8% across-the-board wage rise in the first year of a pay deal, and an increase equal to the rate of inflation plus 2% for the following two years. Annual inflation is currently around 5%.

Industry body Steel and Engineering Industries Federation of Southern Africa had offered 4.4% for 2021, inflation plus 0.5% in 2022 and inflation plus 1% in the third year.

South Africa’s economy, including its export-focused auto sector, was hit hard by the COVID-19 pandemic, making employers reluctant to give in to union demands for above-inflation salary hikes.

Car sales fell by roughly 30% last year for both the domestic and export market, hitting major brands such as Ford (F.N), BMW (BMWG.DE) and Nissan (7201.T) which all have local plants.

“We urge parties to speedily resolve the impasse and prevent long-term damage and possible line stoppages to vehicles being assembled in SA and abroad,” Renai Moothilal, executive director at the National Association of Automotive Component and Allied Manufacturers, told Reuters.

Mark Roberts, a lead convenor at the Retail Motor Industry Association, said if NUMSA’s strike lasted more than a week supplies could be affected.

Separately, the country’s largest trade union federation called on its members to stay away from work on Thursday.

COSATU, which is aligned with the governing African National Congress party but is sometimes critical of its policies, accuses the government of economic mismanagement during the coronavirus crisis.

It wants to pressure policymakers to adopt a looser fiscal stance at next month’s mid-term budget.